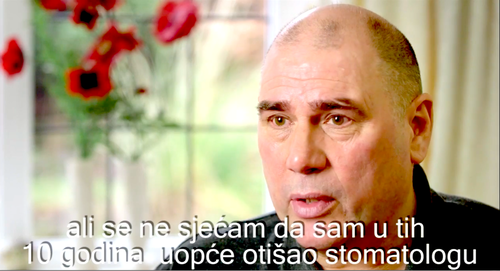 Several of the EFP’s national societies have translated the documentary The Sound of Periodontitis into their local languages, seeking to extend the audience for this pioneering film which offers the patient’s perspective on periodontal disease.

So far subtitled versions of the video have been produced in German, Spanish and Croatian, while versions in French and Polish are on the way.

The EFP is facilitating the process and a section of the Members’ area of the website has been created where the translated texts can be entered so that subtitled versions of the video can be created automatically.

Any perio society wishing to do this should contact Mónica Guinea, the EFP’s European co-ordinator at monica@efp.org.

The EFP had earlier made it easy for affiliated societies to embed the original video (with English subtitles) in their websites. But now they can increase the impact by versions subtitled in their own languages.

First shown at EuroPerio8 in London in June 2016, The Sound of Periodontitis follows four patients who talk about their experiences of periodontitis, peri-implantitis and periodontal treatment.

“We are thrilled to see the film being taken up by a number of countries for translation,” said Ian Needleman, professor of restorative dentistry and evidence-based healthcare at the UCL Eastman Dental Institute and president elect of the British perio society.

“This is a powerful film with messages that are relevant to people worldwide. Our hope is that it will be shared as far as possible and we encourage societies and organisations to help us with this huge ambition.”

Darko Bozic, EFP webmaster, and vice president and EFP delegate of the Croatian perio society, said: “This movie is a genuine gem, and it would be a shame if the non-English speaking people in Europe would miss out on such an informative movie about the patients perspective on periodontal disease. Therefore, an idea came to make it possible to subtitle the movie into other European languages. I would like to encourage EFP-affiliated societies to take this opportunity offered by the EFP and translate the movie into their native language.”

“It is a very good movie, if not the best, to propagate knowledge about periodontology and gums diseases,” stated Maciej Mowak, secretary of the Polish perio society.