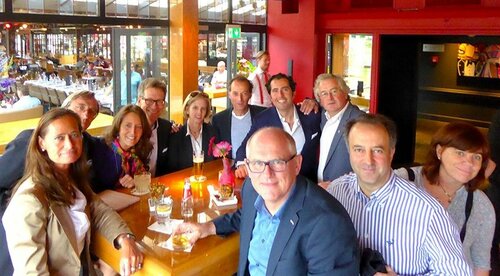 Voting members of the EFP’s Executive Committee (the Core Executive) met in Amsterdam on June 17 to discuss a new five-year strategic plan for the federation which will act as its roadmap into the next decade.

In the coming months, the strategic planning committee will continue to work on the plan, which will be discussed in detail by the executive committee at its meeting in Lisbon in October. The new strategic plan will then be put the EFP’s general assembly, which takes place in Santiago de Compostela (Spain) in March 2017.

The EFP strategic plan 2013-2017 sought to address the need for the EFP to re-evaluate its goals and the structure of the federation as it continues to “strive for the advancement and evolution of periodontology throughout Europe.”

The plan set out five main objectives – improved health, education and training, policy, research, and communication – and two areas of immediate focus: (1) working with consultancies in Brussels to take forward the campaign for recognition of periodontology as a speciality at the European level; (2) providing a media campaign to promote “perio for a better life”, initially disseminating the outcomes of the landmark 2012 workshop on perio and systemic health, which the EFP held together with the American Academy of Periodontology (AAP).

“This was a small core executive group with Tiernan O’Brien in attendance given his committee’s vital role bridging the entire EFP operation,” said Iain Chapple. “The atmosphere was fantastic, being challenging but collegiate, good natured and very productive. We made excellent progress and will have a draft plan ready for discussion at the next EC meeting in Santiago de Compostela.”

Tiernan O’Brien, chairman of the external affairs committee, added: “It is very important for an organisation as diverse as the EFP to achieve consensus among all our member societies on the strategic objectives of the organisation.  Hopefully the time and effort put in to revising the strategic plan in advance of its being presented for approval to the General Assembly will ensure that it does reflect our shared values and helps us on our journey to better periodontal health in Europe."