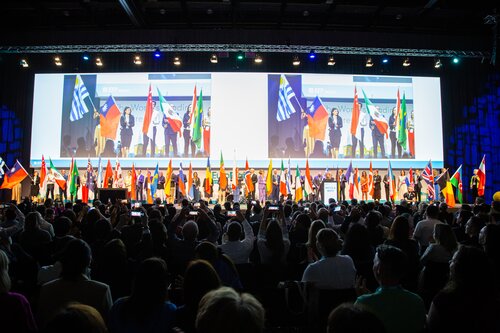 The EFP has hailed the EuroPerio10 congress, held in Copenhagen, Denmark, as the “most exciting” edition of the triennial EuroPerio congress so far held.

The congress had been much anticipated – not least because it had been delayed by a year because of the Covid-19 pandemic – and attendees relished the chance to meet colleagues face-to-face again at a congress that has long established itself as the world’s leading event in periodontology and implant dentistry.

More than 7,200 participants from over 100 countries came to Copenhagen to take part in 41 scientific sessions in the main programme which featured more than 130 leading speakers from all around the world.

Highlights included three live surgeries (two of them in parallel, allowing attendees to compare two techniques for covering multiple gingival recessions) and the presentation of the EFP’s clinical practice guideline on the treatment of stage IV periodontitis, as well as new research on the links between periodontitis and systemic diseases, the long-term outcomes of periodontal treatment, and the impact of personalised medicine on the diagnosis and treatment of periodontal diseases.

Other highlights included clinical-video sessions focusing on surgical treatment, the “nightmare” sessions on periodontal and dental implant treatments that went wrong and how clinicians coped, a tribute to former Journal of Clinical Periodontology editor-in-chief Maurizio Tonetti, and symposia on periodontal and implant dentistry around the world organised with the EFP’s international members societies, including speakers from Argentina, Australia, Brazil, Lebanon, and Taiwan.

As well as the research presented in the main scientific programme, there were also more than 900 abstracts presented during the four days of the congress.

“EuroPerio attracts the best speakers, scientists, and clinicians from around the world to the Olympic Games of dental congresses,” said Phoebus Madianos, chair of EuroPerio10. This is the main event organised by the EFP and the growing success of EuroPerio is mainly due to the scientific programme which delivers the present and future in the science and practice of periodontology and implant dentistry.”

Andreas Stavropoulos, EFP president, commented: “Our main educational activity is EuroPerio, and this edition has attracted a very young audience, which clearly indicates the interest in periodontology of the young generation of colleagues.”

Apart from periodontology and oral health, the topic of sustainability was prominent at EuroPerio10, where organisers managed to reduce printed materials by half compared to EuroPerio9 (Amsterdam, 2018) and where attendees were given passes for public transport to get around Copenhagen in the most environmentally friendly way. And sustainability was the subject of the opening session, where the keynote speaker was Katherine Richardson, whose chaired the Danish commission on climate-change policy.

The closing session of EuroPerio10 – led by congress chair Phoebus Madianos and scientific chair David Herrera – featured presentations on the scientific impact of EuroPerio since its first edition in Paris in 1994 and on the EFP’s recently celebrated 30th anniversary.

Key speakers from each EuroPerio compared what was presented at that time with current knowledge, aiming to explore the scientific impact of the EuroPerio congresses.

This session was followed by a lively closing ceremony which included the presentation of various awards, including the prestigious Jaccard-EFP Research Prize in Periodontology.