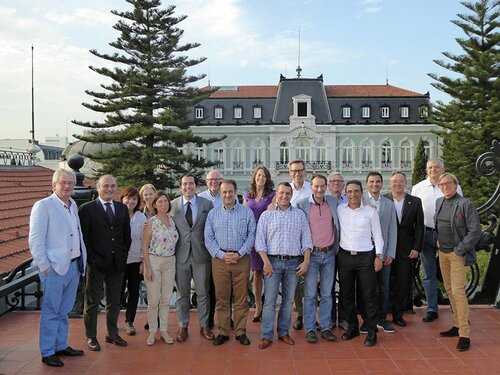 The recent meeting of the EFP’s executive committee in Lisbon reviewed progress across a wide range of areas, including the latest developments for the Perio Master Clinic 2017 and EuroPerio 9 in 2018, and devoted much attention to a new strategic plan and a new operational plan to implement the strategic objectives.

The committee will present the new plans at the EFP’s next General Assembly, which takes place in Santiago de Compostela in Spain on 1 April 2017. The strategic plan will be circulated in advance of the assembly so that it can be studied by members, who will be asked to ratify it.

The new five-year strategic plan (the third that has been drawn up by the EFP) covers the period from 2017 to 2021. It has five focus areas and, for the first time, each of these areas will have specific executive-committee officers in charge as part of a professional implementation plan.

The five areas are:

The five officers will be responsible for providing the implementation plan with clear aims, actions, and timelines in line with the strategic plan and the work of the various EFP committees.

A first draft of their proposals will be presented to the next executive committee meeting, which takes place in Santiago de Compostela just before the General Assembly.

"We are very confident and excited about this new strategic plan, and I'm sure that it will be an important step forward for the EFP," said EFP president Juan Blanco. "Professionalism, education, awareness, and globalisation are our goals. I expect a good reception from all the national socieities – together, we are more."

The EFP Strategic Plan 2017-2021 envisages the creation of the European Observatory on Periodontology and Implant Dentistry, which, if agreed by the General Assembly, will provide a new resource that will boost the EFP’s efforts in communication and lend additional scientific weight to communications of scientific relevance.

“The European Observatory will be a repository for evidence-based information and the authoritative body for comment and statements on issues relating to periodontal diseases and relevant issues concerning implant dentistry,” said Iain Chapple, EFP secretary general.

Another important area that was discussed at the executive-committee meeting was the EFP’s annual periodontal awareness day and the need to build on the great success of the European Day of Periodontology held on May 12 this year.

It was decided to adopt a name that will resonate better with the public, so next year’s activities will be held under the banner of “European Gum Health Day”.

Filippo Graziani has taken charge of co-ordinating this key event for raising awareness of the importance of gum health and promoting periodontology. He is in touch with the individual national societies to develop plans to ensure that the 2017 event has a great impact.

“The latest edition was just one great example of a successful EFP project as 21 countries – that is, 75% of the federation – participated in the European Day of Periodontology, with events, congresses, media outreach and clinical initiatives,” said Graziani.

“We estimate that many thousands of dentists and people have been reached with our message ‘healthy gums for a better life.’ We hope that the next European Gum Health Day – which will also use the hashtag ‘#Perioday’ – will be even bigger, reaching a greater amount of the population. We are already working closely with each national society to develop even further plans for the next May 12.”

The executive committee also agreed to change the name of the external affairs committee to “communications committee” to provide greater clarity over the committee’s purpose and activities.

There was also an update about the progress of the Perio Master Clinic 2017, which will take place in Valletta, Malta, in March next year. Organisers of the event told the meeting that so far there have been 250 registrations and that they hope to reach 500. In addition, they called on the national perio societies to promote the Master Clinic via their websites and social media.

The executive committee also received an update on progress on EuroPerio9, which will take place in Amsterdam in July 2018. One novelty of the event will be a joint session with the Japanese Society of Periodontology.

Looking further ahead, the committee opted for Copenhagen as the host city for EuroPerio10 in June 2021. Copenhagen was chosen, over rival Milan, as the Bella Center meets all the EFP’s criteria and is easily accessible in terms of international flights.

Candidates for the organising committee for EuroPerio10 will be invited to make their proposals in due course. An interim (three-year) task force, led by Stefan Renvert, was approved by the executive committee to provide analysis on potential future sites for the EuroPerio congresses, to work with the EFP’s professional conference organiser Mondial Congress and Events, and to provide general advice.

The executive committee decided not to award the Eminence in Periodontology Award this year. It will, though, award its Distinguished Scientist Aware to Mike Curtis (UK) and its Distinguished Service Award to Uros Skaleric (Slovenia). Both awards will be presented at next year’s General Assembly.