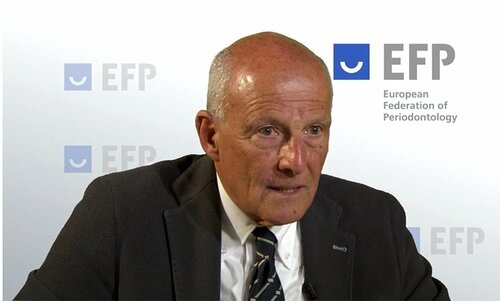 The latest interview in the EFP’s “Perio Greats” series features Prof Giovan Paolo Pini Prato  from the University of Florence, a world-renowned expert in periodontal surgery.

In three videos, totalling 50 minutes, Prof Pini Prato talks about his long career, his work in guided tissue regeneration (GTR) and the development of mucogingival surgery.

The videos are available for viewing at the new Perio Video section of the EFP website, as well as in the EFP Interviews section which houses the entire series of “Perio Greats” interviews with the pioneers of European periodontology.

The three-part interview was conducted by Tiernan O’Brien, chair of the EFP’s communications committee, in Florence in May this year.

In the first video, Starting Out, Prof Pini Prato talks about the start of his career and how he initially combined studying dentistry with his passion for football. A goalkeeper, he played for the Genovese team of Sampdoria and was later in the squad of Florentina, one of Italy’s top clubs. He has also been a football coach and is today vice-president of the Italian anti-doping committee.

He describes how, when he started to specialise in dentistry in the late 1960s, periodontology in Italy barely existed and how he realised that knowledge of the subject was much more advanced in North America and elsewhere in Europe.

He started to study on his own and he describes how he performed his first flap surgery and designed his first grafts, explaining how, through practice and experimenting, he tried to come up with solutions to problems.

Prof Pini Prato also talks about how, in the early days of perio in Italy, the relationship with general dentists was not easy.

“I realised that the general dentist had no idea of periodontal disease. They removed the teeth, they substituted with partial removable dentures, and the patient was happy,” he notes. “It was very difficult to teach our colleagues that periodontology was efficient. At the beginning, they were very suspicious to send us the patient, but after a few years they understood that it was possible to save these teeth.”

In this first video, Prof Pini Prato also describes his work with Sandro Cortellini and Maurizio Tonetti (now editor of the EFP’s Journal of Clinical Periodontology) within a group that researched various aspects of regeneration.

As a university teacher, he tells his students that they should have a “complete perspective of the person” and great respect for the patient. “All the procedures should be done without risk for his or her situation and nothing must be done just to try the procedure, but the procedure should be adapted to the necessities of that patient. This is a moral consideration that has to be taken into consideration in our activities.”

Defining the principles of GTR

In the second video, Defining the principles of GTR, Prof Pini Prato talks about years of research and practice involving guided tissue regeneration, inspired by the initial insights in this area of the American periodontologist Tony Melcher, who outlined the principles of the technique in the mid-1970s.

He describes performing bone regeneration on an 18-year-old student and how he followed the patient for 30 years afterwards, pleased to discover the complete regeneration of the bone together with a good aesthetic result. (This case was discussed in the October issue of the Journal of Clinical Periodontology).

He also talks about developing techniques to cope with problems caused by the exposure of the membrane and the consequent risk of infection and addresses the key question of “When is it reasonable to extract a tooth and place an implant?”

He discusses the treatment of gingival recession and multiple recessions. He points to a study that showed than only 26% of gum recession was perceived by patients and out of this only 27% was symptomatic. In this context, says Prof Pini Prato, “the treatment of unperceived, asymptomatic and non-requested recession should be considered very carefully.”

Other topics tackled by the University of Florence professor include the use of magnification and surgical microscopes, the relationship between periodontal and orthodontic treatment, and developments in periodontal medicine.

The “Perio Greats” interviews with the pioneers of periodontology in Europe trace how they shaped and developed this branch of dentistry. The interviews – all conducted by Tiernan O’Brien – provide lively accounts of experiences, of lessons learnt, and of challenges overcome.

Previous interviews in the series featured Thorkild Karring (who died in August), Klaus Lang, Jan Lindhe, and Ubele van der Velden. All the “Perio Great” interviews are available within the EFP Interviews section of the website and in the Perio Video section.

“These video interviews are to provide future generations of periodontists with a sense of the context in which these studies came about and the motivation behind them,” said Dr O’Brien.