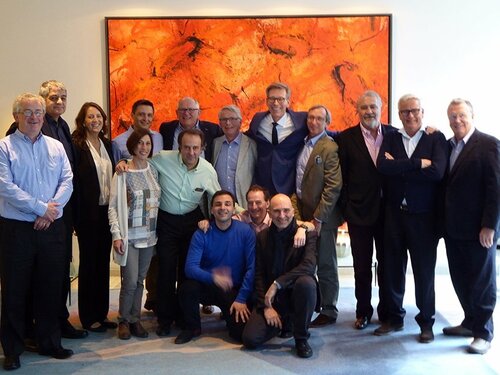 The European Federation of Periodontology held its annual general assembly in Berlin on April 23 at which it elected its executive committee.

Iain Chapple (UK) has become secretary general, on a three-year mandate running until 2019. He takes over from Stefan Renvert (Sweden) who has served in this role for the last six years.

Juan Blanco Carrión (Spain) has taken over from Søren Jepsen (Germany) as president and will hold the post for a year before handing over to president-elect Gernot Wimmer (Austria) at next year’s general assembly.

Tiernan O’Brien (Ireland) replaces Edwin Winkel (The Netherlands) as chairman of the external affairs committee, with Darko Bozic (Croatia) taking over from Dr O’Brien as the EFP webmaster.

Filippo Graziani (Italy) joins the Executive Committee as a new elected member. The assembly re-elected Jörg Meyle (Germany) as treasurer for a second three-year mandate and appointed Phoebus Madianos (Greece) as chairman of the Scientific Affairs Committee (SAC), succeeding Iain Chapple. Lior Shapira (Israel) was appointed to the new role of deputy chairman of the SAC.

The EFP has also appointed Sharon Legendre, the former director of institutional affairs of the Spanish Society of Cardiology, to the new post of head of operations.

“It is quite amazing how far the EFP has come – today being one of the leading global forces in our field – considering that we are an organisation mainly run by volunteers. This is quite unique for an organisation of our size” said Søren Jepsen.

“However, as I stated in an interview earlier this year, we need more professional support to monitor and oversee and follow-up all the ongoing activities. I was very happy to see that our decision to appoint a new head of operations was very well received and that we could officially welcome Sharon Legrendre during the General Assembly.”

There was also a ceremony to celebrate the EFP’s 25th anniversary, which was attended by nearly all the federation’s past presidents. At this ceremony, all previous presidents, secretaries general, and treasurers were awarded the EFP Board Service Award.

“We witnessed and were part of a wonderful 25 years’ celebration in the Grand Hotel Adlon, which was beautifully prepared by Joanna Kamma, who performed the ceremony with grand style and a warm personal touch,” said Prof Jepsen. “It was good to see our junior officers – the future of the EFP – being involved in this part of the celebration.”

Joanna Kamma added: “I was privileged to present to the GA points of the history of our federation, while simultaneously recognising the incredible work and personal dedication contributed by some visionaries, the founding and leading members over the years.”

Prof Jepsen added that the “unique spirit” of the federation showed itself when the general assembly voted almost unanimously to keep the 2017 Perio Master Clinic in Istanbul, despite concerns about safety in the wake of recent terrorist attacks in Turkey.

Malta had been suggested as an alternative venue, but the EFP wished to make a statement against terrorism in support of its original decision to hold the meeting in Turkey.

“Thereby all 23 voting societies present assumed responsibility and gave a clear signal that we stand shoulder to shoulder with our friends from the Turkish Society in standing firm against the threat of terrorism”, added Jepsen. “This is a strong example for the wonderful spirit of our EFP family and a true highlight of the Berlin meeting for me.”