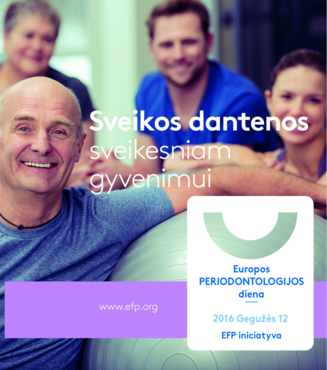 Across Europe, EFP-affiliated national societies of periodontology are organising a wide range of activities for May 12 to mark the European Day of Periodontology promoted by the EFP.

This is the third time that the EFP has celebrated May 12 as a day to raise awareness of gum disease and gum health across Europe. This year’s activities are much more ambitious and numerous than those of 2014 and 2105. The European Day of Periodontology is gaining momentum and this edition has become a turning point for boosting this date at the international level.

This year’s slogan is “Healthy gums for a better life” and the EFP and its affiliated national societies are taking advantage of May 12 to raise public awareness of gum disease as well as its links with other diseases such as diabetes and cardiovascular disease.

The EFP has produced materials to celebrate the European Day of Periodontology, including posters, press releases, images, and a new visual identity. These materials were sent in advance to the national societies so that they could be adapted, translated, edited, and disseminated to members of the societies, the press, sister dental organisations, and other relevant health players.

The Austrian Society of Periodontology is launching a press and media initiative with public television and radio focusing on the importance of periodontology to general health. It is also mailing information about the European Day to all recently registered dentists along with a WHO periodontal probe.

In addition, the society is providing its members and periodontal specialists with a “Take care of your gums” poster, which refers to May 12, and is involved with interdisciplinary activities to highlight the links between periodontitis and diabetes.

The Belgian perio society has invited all dentists in the country to dedicate May 12 to periodontal screening. It has created on its website an ambitious “Healthy gums for a better life” initiative with a dual-language (French and Dutch) “European Day of Periodontology” subsite, which includes useful information on gum health for dentists and patients, and lists all 200 dental practitioners taking part in the massive free screening across Belgium. Furthermore, EFP delegate France Lambert was interviewed at the health show La vie du bon côté on the Vivacité national radio station - and the European Day appeared at the news programmes of the main TV Belgian channels, including RTL and RTBF.

The Croatian perio society has designed two massive “Open Day” periodontal screenings free of charge, one at the University of Zagreb and the other at the Dental Polyclinic in the Croatian capital. Two TV shows were scheduled on the national public TV channel to explore in depth the symptoms of gum disease and its interaction with cardiovascular disease. Other activities involve a team of 50 dental students handing out 10,000 informative leaflets on periodontal disease at a major square in Zagreb and the premiere of the Croatian version of the film The Sound of Periodontitis complete the European Day programme.

The Finnish perio society is promoting the European Day both to its members and via the Finnish Dental Society. It is also taking part in the “I love suu” [“suu” is Finnish for “mouth”] campaign organised by the Finnish Dental Association, which started on April 11 and focuses on prevention and the early diagnosis and treatment of the most common oral infections, caries and periodontitis. Finland’s leading comedienne, Krisse Salminen, fronts the campaign, using humour to draw attention in a fresh way to the importance of oral health.

“Based on the previous experience, they are expected to get wide publicity at different levels,” said Eija Könönen, president of the Finnish Society of Periodontology. “By these actions, we have kept and will keep the ‘perio flag’ flying visibly high in our country.”

The French perio society is organizing for May 12 a big multidisciplinary day to be held jointly with endocrinologists, cardiologists and gynecologists with the aim of educating and raising awareness about the link between periodontal and systemic health.

In addition, the SFPIO has prepared an informative campaign announcing this “Grande journée multidisciplinaire de formation paro-médecine” and the European Day with a press release that has been sent to the dental and mainstream press, and also distributed on social media.

The German perio society has prepared a series of specially-designed posters for all its 4,800 members, who were able to download them from the DG Paro homepage. The practitioners can place the poster in their practice to announce the European Day of Periodontology, and then choose how they take part – for example, by distributing patient leaflets, promoting professional mechanical plaque removal and periodontal screening, or showing the film The Sound of Periodontitis at the practice.

The Hellenic Society of Periodontology published an advertisement in the daily press on May 8, and an article (based on the EFP’s press-release template) in Odontiatriko Vima, the most widely circulated dental newspaper, in order to announce the European Day of Periodontology to the dental community. All interested patients are offered free periodontal examinations, as well as risk-factor evaluations and information on any periodontal treatment needed.

The Italian perio society is linking May 12 to its recently launched Gengive Informa campaign which is designed to raise the awareness of the Italian public of the importance of early diagnosis, prevention and treatment of periodontitis and of its relationships with systemic health.

This campaign intends to reach Italy’s 50,000 dentists and more than 20 million citizens. It includes advertisements on national radio and TV, the presence of the society’s board members in health broadcasts, press releases, and a dedicated website at gengive.org.

The SIdP has commissioned a large population survey on the periodontal status of people in Italy, which shows than more than 20 million people aged over 35 are affected by some form of periodontitis and that 40% of these people are either undiagnosed or have been misdiagnosed, which leads to confusion about what is really needed to control this pathology. Printed posters and other materials on the European Day are being disseminated via the internet and at a continuing-education course in Bologna.

The Israeli perio society has programmed the activities related to the European Day of Periodontology during the month of May because May 12 is national independence day.

These initiatives include: a public-relations campaign with dental companies which includes the publication of articles on periodontal and general health; four free conferences across the country aimed at making periodontology more accessible to general dentists and medical doctors; an information campaign aimed at the general population on its website and social media pages; and a course for teaching periodontologists how to motivate patients and to help them to stop smoking.

The president of the Lithuanian Association of Periodontology, Jurate Zekoniene, has been invited to give an interview on the national television channel LTV on May 12 to discuss the importance of oral and periodontal health in relation to systemic health. In addition, several interviews on the importance of periodontal health, the role of periodontists, and the link between periodontitis and systemic diseases have been planned to be published in Lithuania’s biggest news portal in the run-up to the European Day.

Outreach work in schools has also been planned with events related to gum health at schools in Vilnius, with about 200 children participating in a game where they can compare their knowledge and skills of keeping their mouths and bodies healthy. “The EFP’s communication tools have been very helpful,” noted Gelažienė. “We are very happy to be a part of this excellent initiative.”

The Dutch perio society disseminated the European Day materials among the press and its members, via its website, its newsletters, and its social-media pages. In addition, the NVvP announced the European Day of Periodontology at its recent national congress in April via a PowerPoint presentation.

The Portuguese perio society has developed an informative campaign aimed at its members and the most important publications in Portugal, and has sent them the EFP-produced visual and written materials relating to the European Day of Periodontology.

The Romanian perio society has organised a special course for periodontists on May 12, led by its president Prof Anca Silvia Dumitriu, to highlight both what it has achieved scientifically and professionally in recent years and to emphasise the advantage of being part of the EFP in terms of research, knowledge dissemination, and awareness.

The Russian perio society is also supporting the European Day of Periodontology, which it presented to its members at a congress held in Moscow on April 19.

The Spanish perio society has helped create a coalition called “Alliance for Perio and General Health” together with the Spanish scientific societies of cardiology, diabetes, and general-health practitioners, which aims to promote gum health in the framework of an approach to general health. The “València Declaration” and a press conference are the concrete outcome of this Alliance, whose formal launc was included in the programme of the SEPA València 2016 annual meeting.

The Swiss perio society, which is preparing its next annual meeting under the EFP motto “Perio for a better life”, has prepared a press release including an official statement about the European Day, which has been distributed via its website, the media, and a dental journal available online and in printed form.

The Turkish perio society has devised a communication strategy to reach dental healthcare professionals, medical doctors and patients. In this context, it is working with the Turkish Dental Association and the Ministry of Health to promote a policy for primary prevention of perio and general health. Coinciding with the European Day, the Turkish society has disseminated its messages via its website, health-related media, other medical organisations, and mainstream media, such as the Hürriyet newspaper and ​​a local Ankara TV channel.

The Ukrainian Society of Periodontists has organised a day of periodontal check-ups at the National Medical Academy in Kiev with patients and dental practitioners. It has also scheduled discussions of different options of perio treatment, guidelines extracted from the EFP Prevention Workshop, and strategies for the improvement of gum health. Special attention has been paid to teaching hygiene procedures and to giving lifestyle recommendations to patients, particularly young people.

As published here, the British Society of Periodontology is carrying out a public-awareness campaign at a London shopping centre during the second week of May, including a large LCD billboard which displays a shock video about gum health, using the slogan “Don’t let gum disease wipe the smile off your face.”

The BSP’s “Gum Health Day” campaign aims to raise awareness of gum health and achieve behavioural change by encouraging people to visit their dentists to check for gum disease.

In addition, the Danish perio society sent the European Day materials to its members, even though it did not organise any special activities.

For the first time, this pan-European initiative has also found support from outside the EFP: the Azerbaijan perio society, which is not an EFP member, has joined in celebrating the European Day of Periodontology.