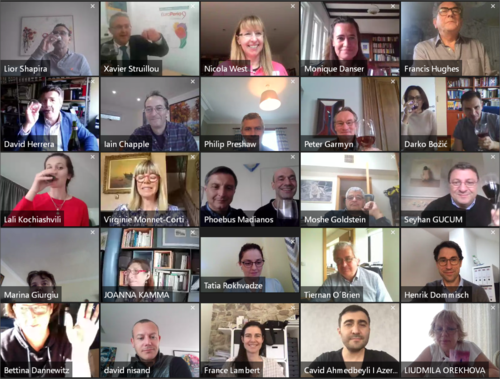 The Society of Periodontology (Singapore) was welcomed into the EFP family as its seventh international associate member at the federation’s general assembly, held on Saturday 20 March.

The EFP now comprises a total of 37 national societies of periodontology, with 30 members in Europe (26 full members, four associate members) and seven international associate members. As Singapore joined the EFP, the Ukrainian Society of Periodontists, which had been an associate member, left the federation.

The Singapore perio society was established in 1997 and currently has 37 ordinary members, 12 life members, and two associate members, Its main aim is to pursue scientific and clinical advancement in the practice of periodontology by engaging periodontists and other oral-health practitioners.

"Our members have been participating in various EFP conferences for many years, and have benefited much from what the EFP has done," said Jonathan Phua, vice president of the society. "As an international associate member of the EFP, we hope to share in the organisation’s resources in both the pursuit of advancing the clinical practice of periodontology and the promotion of oral health. We certainly look forward to forging closer bonds with the other members of the EFP in the years to come."

The general assembly, held at the end of Xavier Struillou’s presidency, was held online because of the Covid-19 situation.

In his report to the general assembly, Xavier Struillou described how he had met 24 national societies over the course of the year to discuss their needs and how best the EFP could help them. It was agreed that there would be a virtual meeting between the executive committee and the presidents and EFP delegates of the national societies to take place in October after the half-yearly executive committee meeting.

Nominated by the German perio society DG PARO, Mortiz Kebschull became the new elected member of the executive committee and will become EFP president in 2024-25. He is professor and chair of restorative dentistry at the University of Birmingham in the UK and has served two terms in office on the DG PARO executive committee as well as running various projects in the UK with the British Society of Periodontology.

Prof Kebschull was one of the co-chairs of Perio Workshop 2019 which drew up the EFP’s S3-level clinical practice guideline on the treatment of periodontitis stages I-III and he co-chaired the “adolopment” process to implement the guidelines nationally in both the UK and Germany. For the EFP he has been a junior officer on the workshop committee and a EuroPerio ambassador.

The assembly also set the date and location for EuroPerio11.  This will now take place in Vienna on 14-17 May 2025. The originally chosen venue in Munich was not available in 2025, with the congress taking place a year later than first planned as a consequence of the postponement from 2021 to 2022 of EuroPerio10.

Various awards were announced at the general assembly. The Eminence in Periodontology Award was given to Mariano Sanz (Spain), the Distinguished Scientist Award to Tord Berglundh (Sweden), and the Distinguished Service Award to Gernot Wimmer (Austria). In addition, four prizes were awarded for postgraduate research to students at the EFP-accredited programmes in periodontology (see ‘General assembly gives awards and research prizes’).

Following the assembly, Lior Shapira (Israel) started his year as EFP president. Outlining his vision for the next 12 months, during which the EFP will celebrate its 30th anniversary, Prof Shapira said “The year 2021-22, under my presidency, will be the ‘Return to Normal Year’. We need to find ways to go back to normal life, keep the tradition of the EFP, and strengthen the feeling of one community. My vision is to keep the EFP as the influential driving force of periodontology globally.”

He highlighted the need to work more with family doctors to promote oral health and the importance of increasing the influence of women periodontists (see: ‘New EFP president outlines vision for ‘returning to normal’).