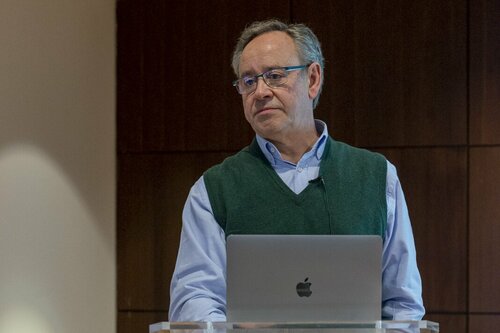 A series of awards and prizes were given by the EFP general assembly, which took place online on Saturday 20 March.

The Eminence in Periodontology Award was given to Mariano Sanz, professor of periodontology at the Complutense University of Madrid (right), who chaired the EFP workshop committee from 2009 to 2019, co-ordinating the annual workshops held at La Granja de San Ildefonso in Spain that have drawn up consensus reports on key issues in periodontal science and clinical practice. Prof Sanz was the second president of the EFP in 1993 and the federation’s secretary general from 1998 to 2005.

Mariano Sanz’s nomination for this award by the Spanish Society of Periodontology and Osteointegration (SEPA) was endorsed by the British, Dutch, Hellenic, Irish, Israeli, Polish, Portuguese, Serbian, Slovenian, Swiss, and Turkish national societies of periodontology.

According to the letter of endorsement from the Hellenic Society of Periodontology, “His longstanding leadership and contribution at every level of the EFP has played a significant role in the promotion and excellence of periodontology at both the European and global level.”

Mariano Sanz said:"In these 30 years of service for the EFP I have enjoyed every minute trying to rise the bar of European periodontology. It is a great satisfaction to see that today European periodontology is at its peak in the global context, not only in terms of the generation of new knowledge with new research findings coming from Europe, but also in terms of influencing and developing the  way we practice periodontology and implant dentistry in the whole world.

"The receipt of this eminence award recognising my contribution in this important process not only makes me happy but also very proud of a small group of professionals, who later became very close friends, who in 1991 started putting together this umbrella organisation that we called EFP.  With a great vision and a lot of effort, we were able to organise EuroPerio congresses, EFP workshops, set up the EFP postgraduate programmes, and generate a collective effort among academics and clinicians to bring our scientific journal the Journal of Clinical Periodontology to the top list of dental scientific publications"

The Eminence in Periodontology Award is given in recognition of outstanding service to the EFP and contributions to the understanding of the field of periodontology and the diagnosis and treatment of periodontal diseases. It has been awarded on only two previous occasions, to Ubele van der Velden (Netherlands) in 2013 and to Gianfranco Carnevale (Italy) in 2014. Last year, the EFP gave a special award – the EFP International Eminence in Periodontology Award – to the late Bob Genco.

The Distinguished Scientist Award was given to Tord Berglundh (Sweden), professor and chair at the department of periodontology at the Institute of Odontology, Sahlgrenska Academy at the University of Gothenburg in Sweden. Prof Berglundh has been a regular chair of the working groups at the EFP’s Perio Workshops and authored the EFP’s guidance to clinicians on the new classification in relation to peri-implant health, peri-implant mucositis, and peri-implantitis.

The Distinguished Service Award went to Gernot Wimmer (Austria), professor of periodontology at the Medical University of Graz in Austria, who was EFP president in 2017-18 and treasurer of EuroPerio9 in Amsterdam (2018). Currently chair of the federation’s congress committee, Prof Wimmer was a member of the organising committee of EuroPerio (Vienna 2012) and has been a regular participant in the EFP’s Perio Workshop.

There were four prizes awarded for postgraduate research to students at the EFP-accredited programmes in periodontology.

Pre-clinical/basic research: First prize to Jaime Bueno, of the Complutense University of Madrid (Spain) for the paper “Antimicrobial effect of nanostructured membranes for guided tissue regeneration: an in vitro study,” published in Dental Materials 36 (2020) 1566-1577.

The second prize went to Oded Heyman, of the Hebrew University-Hadassah Medical Center in Jerusalem (Israel) for the paper “Niche specific microbiota-dependent and independent bone loss around dental implants and teeth,” published in Journal of Dental Research 2020, Vol 99 (9), 1092-1101.

Clinical research: First prize to Lou Li Manni, of the University of Liège (Belgium), for the paper “Clinical and radiographic assessment of circular versus triangular cross-section neck implants in the posterior maxilla: A 1-year randomized controlled trial,” published in Clinical Oral Implant Research 2020; 31:814-824.

The second prize was awarded to Astrid Wylleman of KU Leuven (Belgium) for the paper “Alveolar bone level at deciduous molars in Flemish children: a retrospective, radiographic study,” published in Journal of Clinical Periodontology 2020; 47: 660-667.