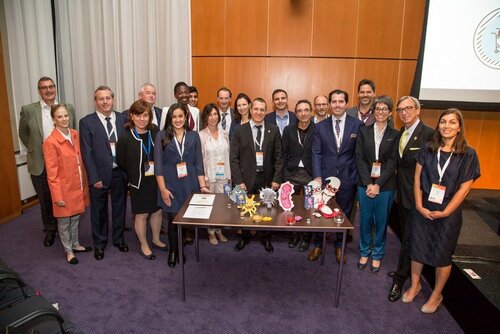 The EFP is evaluating proposals for outreach campaigns on oral health that were produced earlier in the year by master’s degree students in an innovative collaboration with a world-leading design school.

The aim is to see which ideas and communications materials — for public campaigns and for a new “EFP partner” logo — created by the students at the Istituto Europeo di Design (IED) in Madrid could be used or adapted by the EFP in its future communications work.

In February, the EFP briefed the 32 students who took part in this special IED module on the EFP and its work and asked them to come up with campaign messages and a partner logo that were “engaging, inspiring, and compelling.”

The students were asked to create material for an EFP awareness campaign, including a logo that EFP partners could use on their oral-hygiene projects (not as an endorsement of the products, but simply as a statement of their partnership with the federation).

In May, six groups of students presented their alternative awareness projects and logos to Iain Chapple, EFP secretary general, and Gernot Wimmer, EFP past president, and to the course teachers.

Three projects were selected for the next stage of the project, where one representative of each group visited EuroPerio9 in June to present the proposals to members of the EFP executive committee and to meet EFP partners Colgate, Oral-B, Sunstar, Johnson & Johnson, Geistlich, and GlaxoSmithKline.

The campaigns proposed by the IED students (who came from a wide range of different countries) were extremely varied. One proposed lively cartoon “monster” characters to target young children, while another used a constructivist graphic style to drive home messages about a “gum revolution”. One proposal involved focusing on beauty and health, while another proposed targeting “millennials” with the message that white teeth are not necessarily healthy teeth. While one group put forward a campaign based on prevention of gum disease under the concept of “small changes, great smiles”, another proposed the concept of “mouthfullness” to communicate instructions on oral hygiene.

The EFP’s communications team is now going through all six projects, closely examining them to see which elements might prove useful for future campaigns aimed at the public. For instance, some of the suggestions from the students could evolve into materials used in future outreach campaigns with EFP partners or in the annual Gum Health Day. In addition, the students’ analysis and ideas may help the EFP as it seeks to communicate to younger audiences using the latest technological tools.

While it remains unlikely that the EFP would simply adopt one of the campaigns proposed as part of this master’s degree project, it is certainly possible that certain elements will be adopted or adapted for future work.

Any recommendations put forward by the communications team will be considered by the EFP’s executive committee at its next meeting, in Athens on October 13.

Sharon Legendre, EFP head of operations, said: “The overall results were extremely positive. The students offered us punchy ideas in a very modern and fresh manner using all the communication tools that are applied today. The EFP will definitely use some ideas in the future.”