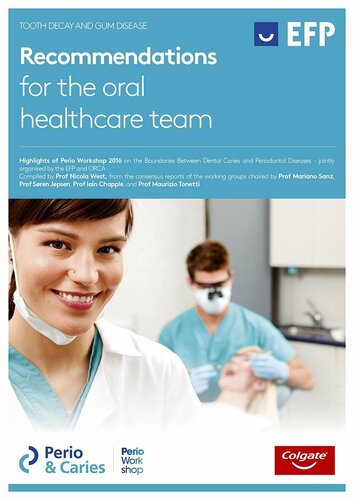 The EFP has launched an ambitious awareness campaign about the relationship between dental caries and periodontal disease – the most common non-communicable diseases in humans and the leading causes of tooth loss.

The Perio & Caries project is based on the outcomes of Perio Workshop 2016, which focused in depth on “the boundaries between dental caries and periodontal disease”, reviewing all available evidence on interactions, common risk factors, and shared patterns between tooth decay and gum disease.

The aim of this new project is to disseminate the main conclusions of the workshop to five groups of people: dentists, other health professionals, researchers, policymakers, and the public.

The core element of the Perio & Caries project is a new website – perioandcaries.efp.org – which contains a wealth of material that can be downloaded, including:

Perio Workshop 2016, held at La Granja de San Ildefonso in Spain, brought together 75 leading periodontists and cariologists from around the world. It was organised by the EFP in partnership with ORCA (the European Organisation for Caries Research).

This workshop was the first major scientific attempt in the world to consider dental caries and periodontal disease not as separate entities, but as interrelated process that can share genetic, aetiological, social, and environmental determinants – although they follow different trajectories and usually emerge at different ages.

The scientific outcomes of Perio Workshop 2016 are publicly available in a special open-access supplement of the EFP’s Journal of Clinical Periodontology.

“These disease processes have been historically analysed under very different optics and the cultures of analysing the scientific evidence by the cariologists and the periodontists were clearly well apart,” said Mariano Sanz, chair of the EFP’s Workshop committee. “This workshop has allowed us to identify the areas of convergence between these diseases and also the aspects in prevention and therapy that are key to both disease processes.”

The Perio & Caries campaign is the second project that the EFP has launched with its partners, following Oral Health and Pregnancy, with Oral-B, which launched in September 2017.