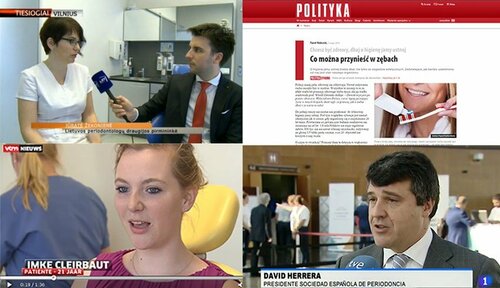 The European Day of Periodontology, organised by the EFP and celebrated on May 12, generated a wealth of positive media coverage in countries across Europe which helped communicate the event’s message of “Healthy gums for a better life.”

There were television and radio interviews, plus articles in national, local and specialist press. In addition, there was much direct communication with the public via publicity material and via social media, with many national societies taking advantage of communications materials created by the EFP.

With 21 EFP-affiliated national societies taking part (plus the non-EFP member the Azerbaijan Society of Periodontology), this third annual European day of periodontal awareness was a very successful event.

In terms of media coverage, the Austrian Society of Periodontology succeeded in getting national media to report on periodontal disease and the activities of the European Day.

There was television coverage by ORF, the Austrian public-service broadcasters, a radio news item on the same broadcaster’s radio health programme Ö1 Radio Doktor, plus coverage in the Die Mucha monthly consumer magazine and the dental-news portal ZWP Online.

In addition, there was an article in the Austrian edition of the Perio Tribune magazine which discussed periodontal disease, its links systemic diseases such as diabetes and cardiovascular disease, and the European Day of Periodontology.

It also sent posters promoting the European Day of Periodontology to dentists as well as WHO periodontal probes to all recently registered dentists.

The Belgian Society of Periodontology launched a press and media campaign aimed at gaining coverage on public television, radio and the print media.

As a result, television channel RTL broadcast a news item headlined “80% of Belgians aged over 35 suffer from periodontal diseases”, which featured an interview with Michèle Reners, chair of the EuroPerio9 organising committee.

Other coverage included a news item on the Bel RTL radio channel, an article in the Le Soir newspaper, as well as articles in the La Meuse and L’Avenir newspapers.

The Belgian society also created a special area on its website devoted to the European Day and organised the provision of free periodontal screenings across the country. By consulting this area on the website, patients were able to find a local dental practitioner who was taking part in the mass screening. About 200 dentists performed such free screenings in the week around May 12.

The Croatian perio society participated in two programmes on the national television channel of broadcaster Croatian Radiotelevision. Darko Božić, EFP delegate and vice-president of the Croatian society, joined cardiologist Hrvoje Pintarić in a live programme which considered the impact of periodontitis on cardiovascular disease. There was also a news report on the channel’s daily news programme.

Two newspaper articles covered the European Day and the Croatian society used Facebook to reach younger people. It also staged an awareness event in the main square of Zagreb and free dental check-ups and periodontal screenings were offered at Zagreb’s School of Dental Medicine.

The Hellenic Society of Periodontology published an advertisement in the daily press on May 8 and an article (based on the EFP’s press-release template) in Odontiatriko Vima, Greece’s most widely circulated dental newspaper, in order to announce the European Day of Periodontology to the general public.

EFP associate member the Lithuanian Association of Periodontology was very active around the European Day of Periodontology. The association’s president Jurate Zekoniene was interviewed on the national television channel LTV on May 12 about the importance of oral and periodontal health in relation to systemic health.

In addition, the Lithuanian perio society succeeded in getting coverage of the European Day and issues related to gum health in various news websites: the general news sites Delfi, Lrytas and Alfa, together with the medical news site Santaros Žinios.

The Spanish Society of Periodontology (SEPA) grabbed the airwaves and captured the headlines with its May 12 launch of the Alianza por la Salud Periodontal y General (“Alliance for Periodontal and General Health”) initiative.

This new collaboration between SEPA and the Spanish societies for diabetes and cardiology, among others, was covered extensively in the Spanish press, including national newspapers ABC, El Economista, and La Vanguardia, various regional newspapers, as well as specialist medical publications.

David Herrera, the immediate past president of SEPA and now its EFP delegate, gave an interview to a news programme on the Valencia regional news programme of Spanish public-service broadcaster TVE.

In terms of direct communication with the public, the Spanish society carried out a “Cuida tus Encías” [Take care of your gums] information campaign, handing out leaflets in the main railway station in Valencia from May 11 to 14 (coinciding with the 50th annual SEPA congress) and offering free oral-health check-ups and blood-sugar control for the early detection of diabetes.

The Turkish Society of Periodontology organised interviews on two television channels – with president Sule Bulut interviews on Baskent TV and general secretary Seyhan Gucum on NTV – as well as an article on a health news website.

The impact in the media from the European Day of Periodontology is not just a short-term phenomenon and several EFP-affiliated perio societies have used it as a springboard to launch longer-term media campaigns.

For instance, the British Society of Periodontology (BSP) is in the middle of national media campaign, which it launched ahead of the European Day, in which it has contacted more than 900 journalists.

As a result of contacting the media with the press release about the European Day, the Dutch Society of Periodontology (NVvP) has been approached by a national newspaper to provide material for a special issue devoted to oral health to be published on June 20.

It also placed the film The Sound of Periodontitis (with German subtitles) in the section of its website aimed at the public and said that it “will increase our efforts in the public media and, if possible TV and radio, in the next months.”

Use of social media

The impact of the European Day of Periodontology was felt not only via the press, television and radio, and news website – the websites and social-media outlets of the national perio societies also proved an important means to spread the message about gum health.

The BSP’s activities around May 12 included a specially produced video that was on display at a big London shopping centre for a week, a separate educational website, and a social-media campaign utilising mouth cards for people to take and share their own “mouthies”.

This campaign (#howsyoursmile) has already received more than two million views on Facebook and has recently been launched on Twitter too.

The BSP also noted that “The EFP background materials have been made available on the BSP website and have helped to develop the educational scope of the BSP website, for both the public and professionals.”

The Israeli Society of Periodontology – which organised events ahead of May 12 because the day chosen for the European Day is also Israel’s independence day – upgraded its website and Facebook page, incorporating materials provided by the EFP. Issues covered included the role of the periodontist, the importance of using interproximal devices, and the links between periodontal disease and cardiovascular disease.

The society also launched a YouTube channel with three films (in Hebrew with English subtitles) featuring the heads of the periodontology departments at three Israeli universities.

These films have also been distributed via Facebook, where they have already been viewed more than 13,000 times.

“The European Day of Periodontology is a brave new initiative for us in the EFP,” said Tiernan O’Brien, chairman of the External Affairs Committee. “This initiative is a great example of the positive influence that the EFP can have on dental health in Europe, and I am so happy that the mission to let Europe know about periodontal health has been enthusiastically embraced by so many of our national periodontal societies.”

Dr O’Brien congratulated the societies on their multiple activities and added: “Given the major success of this year’s project, we need now to build on this for next year to ensure that our message of ‘Periodontal health for a better life’ reaches even more people on the European Day of Periodontology 2017.”