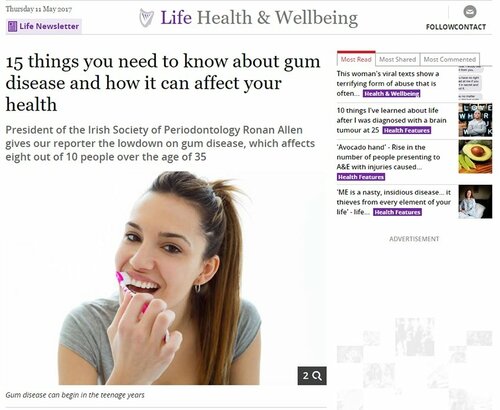 European Gum Health Day 2017 takes place on Friday, May 12 – but it is already having an impact in the media, thanks to the efforts of EFP-affiliated national societies of periodontology.

On May 9, the Irish Independent newspaper published an article based on an interview with Ronan Allen, president of the Irish Society of Periodontology, headed “15 things you need to know about gum disease and how it can affect your health."

The article explains what periodontitis is, what causes it, the signs people need to look out for, the risk factors, and the steps that need to be followed to prevent or treat the disease and to maintain periodontal health.

In Portugal, three television interviews with board members of the Portuguese Society of Periodontology have been broadcast already.

Ricardo Faria Almeida, immediate past president of the Portuguese Society of Periodontology and its EFP representative, was interviewed on the morning news programme TV Bom Día on the main channel of public-service broadcaster RTP on May 7. The following day, he took part in a talk show on Porto Canal, a regional channel in northern Portugal.

An article by Eija Könönen, president of the Finnish Society of Periodontology, encouraging colleagues to sign the EFP Manifesto on Perio and General Health, has been published in the Finnish Dental Journal.

Meanwhile, Phil Ower, immediate past president of the British Society of Periodontology, has written an article for the Mail on Sunday about gum disease which explains why people get this condition, what happens when it progresses, and what can be done to control it. This article will be published on May 21 as part of a “pull-out” guide to dental health.

There will be much more media coverage in the coming days, the result of the considerable work put into European Gum Health Day by the EFP and its affiliated national societies.