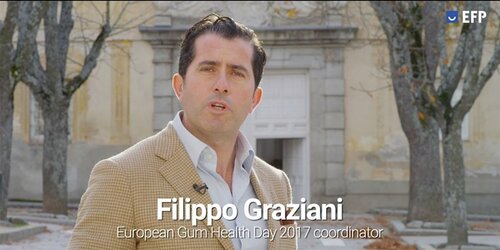 On May 12, the European Federation of Periodontology and its affiliated national societies of periodontology will stage a Europe-wide awareness day for the fourth time.

European Gum Health Day 2017 will be the biggest event of its kind, and 25 of the EFP’s 30 member societies have confirmed their participation. Actions planned include free periodontal screenings, special courses and conferences, the handing out of leaflets about periodontal health, and widespread media activity.

Last’s year’s event, held under the name “European Day of Periodontology”, was a notable success, involving the participation of 21 national societies, and has provided a good model for the 2017 awareness day.

Indeed, much has been learnt from 2016 in terms of how to improve organisation and co-ordination to ensure that European Gum Health Day 2017 has the maximum impact and that its message about the importance of gum health reaches as many people as possible.

“Basically, the core executive committee felt would be helpful to have the support of somebody fully dedicated to the organisation of this event, and it was established that the newly elected member in the core EC would be the following year’s co-ordinator,” explains Filippo Graziani.

He highlights the importance of this annual awareness day to the EFP: “The EFP does EuroPerio and the Perio Master Clinic, but we didn’t really have a yearly event. European Gum Health Day gives us the chance to reach out to a significant number of people – with TV and radio messages, we are talking about the potential to reach millions of people throughout Europe.”

All societies did one of more of the following: held courses at universities, appeared on television or radio, or issued press releases to the media. “This didn’t require huge funding, but lots of efforts and organisation are needed. It is important to notice that everybody tried to do something important and that was the main achievement of last year” notes Graziani.

There were even some societies that managed to fund big-impact activities, such as the British Society of Periodontology with its hard-hitting video campaign and a big event at a London shopping centre.

The main lesson which the EFP learnt from last year was that better co-ordination was needed to improve the impact of the awareness day.

He adds that the second big lesson was about the scale of the event. Last year’s event was much bigger than the previous two awareness days in 2014 and 2015 – indeed, the amount of activity and the enthusiastic response from so many national societies exceeded the EFP’s original expectations.

“Last year was the first time we were doing something pretty big, so we might have been reaching the societies with materials – I wouldn’t say late, but maybe closer to May 12 than would have been ideal,” Graziani suggests.

Graziani emphasises that the material provided “is fully customisable so that it can be adapted by the societies in terms of language and adding their logos, whatever. We don’t want them to change the image, we don’t want them to change the slogan, but they can translate it and add their own material. They are free to adjust it because, after all, it is their event.”

In working with the national societies in drawing up plans for European Gum Health Day 2017, Graziani came up with a four-point action plan, which he dubbed “EFP.com”:

E: Enthusiasm: Keeping up the momentum, touching base frequently;

P: Passage: Encourage the exchange of materials between national societies;

Com: Communications: improving the connection with the national-society delegates.

Looking at the activities planned by the EFP-affiliated national societies for May 12, 2017, there will be a wider participation this year, as 24 of the EFP’s 30 member societies have confirmed their involvement. “This is truly a major success,” says Graziani, who describes the planned activities as falling into four categories: mass communication, target, a special day, and clinical activities.

Mass communication: This is the approach adopted by the biggest number of societies and involves activities such as handing out leaflets to the public, giving interviews to television and radio, and issuing press releases. Eleven societies are taking this approach: the Belgian, Finnish, German, Greek, Hungarian, Israeli, Lithuanian, Portuguese, Russian, Slovenian, and Swedish societies.

Target: This is the approach adopted by the British and Spanish societies which are focusing on very specific messages aimed at target audiences (including the links between periodontal disease and diabetes, and how periodontal health affects sports performance).

A special day: Seven societies are opting for this approach, with activities including special courses or conferences focused on periodontal health. This is the strategy adopted by the Austrian, Croatian, French, Irish, Moroccan, Romanian, and Polish societies.

Clinical activities: the Azerbaijani, Dutch, Italian, and Turkish societies are offering free periodontal screenings to members of the public.

This categorisation is intended to illustrate the main activities of the various national societies. Many will be active in more than one category – for example, those who are providing clinical activities, a “special day”, or a targeted approach may also issue press releases or give interviews to the media.

One notable difference this year is the change of the awareness day’s name from “European Day of Periodontology” to “European Gum Health Day”.

Whereas in 2016, the name of the event stressed “periodontology” and the slogan for the day – “Healthy gums for a better life” – highlighted gums, this time the emphasis is the other way around, as the slogan for European Gum Health Day is “Fighting periodontal disease together.”

Graziani explains the thinking behind this move: “The reason why we changed this is that we are not aiming at dentists but at the general population, for whom “periodontology” does not exist, but for whom gum health and gum disease do exist. So, we decided to call it “Gum Health Day” (rather than “Gum Disease Day”) in order to have a positive message.

“So now, the word “gum” has more importance, but we have ‘periodontal’ in the slogan, so we now have everything together: gum health, gum disease, and perio all together.”

Summing up the aims of European Gum Health Day 2017, Filippo Graziani says: “We don’t treat periodontal problems – we treat patients, people, human beings. I thus believe that is the role of the European national societies of periodontology to make sure that an increasingly large number of people in Europe become aware of the importance of gum health.”