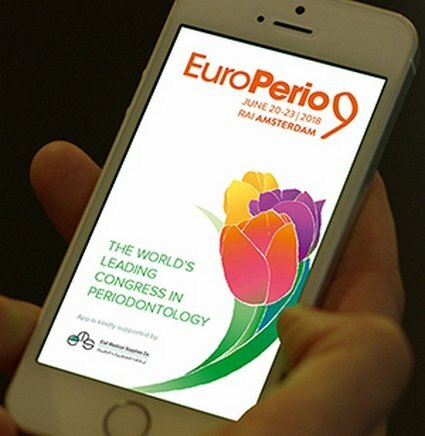 The EFP and its professional congress organiser Mondial Congress & Events have launched a special EuroPerio9 application for mobile devices that offers a wide range of features.

The EuroPerio9 App provides full information about the scientific programme for EuroPerio9, which takes place at the RAI Amsterdam congress centre from June 20 to June 23.

The app will enable live voting to take place in certain sessions and can also be used for asking questions to speakers. In addition, the app can be used to vote for photographs in competition in the 1st EFP Photo Contest.

Crucially, the app includes the facility for “push” messages, which will allow organisers to send important messages to all participants (if there is a last-minute change in the programme, for instance).

The other features of the app are:

Three instructional videos that explain how to use the app are available: Getting started, Navigating the programme, and Session voting and FAQ.

The app is a special section within the EFP App that was launched earlier in the year and is available for both Android and iOS smartphones and tablets. The EFP App can be downloaded from Google Play and the Apple Store.

“Congress apps are increasingly becoming the number-one source of information for congress delegates and, unlike traditional print media, they can be updated with the latest content almost instantly,” said Marie Lechner, of Mondial Congress & Events.

“They also enhance interactivity within the scientific programme – for example, via live voting and Q&As – leading to an improved learning experience. Special communication features within the app can serve to bring people with the same interests together, facilitating networking among participants.”

The EuroPerio9 app works as an “app within an app” inside the EFP App, which was launched in March.

The EFP App has already been downloaded and installed by about 2,000 people and the target is to attain 10,000 downloads by the time EuroPerio9 ends on June 23.

A recent addition to the services provided by the app has been “push” notices, whereby alerts are sent to users encouraging them to log in to access specific content.  This facility will be used in the weeks after EuroPerio9 to encourage people who have used the congress application to continue using the EFP App to receive news and publications from the EFP.

EFP president-elect Filippo Graziani, who was responsible for launching the EFP App, said: “With the EuroPerio9 app we reach the conclusion of the first phase of the EFP App. The app is now fully functional, so that people can get information from the website through the telephone at a click, and so that they will be able to get the best out of the EuroPerio9 experience.”

Future plans for developing the EFP App include adding material that can be viewed offline and the provision of interactive content and utilities that can be used by researchers and clinicians in their daily practice.