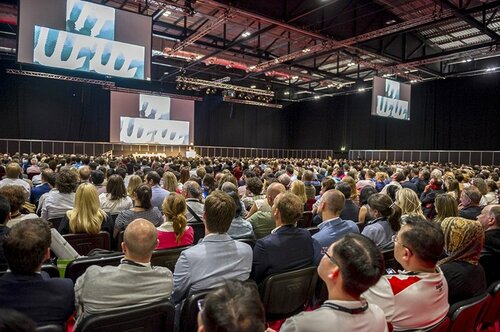 The organising committee of next year’s EuroPerio9 has published the scientific programme for the congress. Delegates will be treated to an action-packed programme full of the latest insights into periodontal science and clinical practice.

The four-day programme for the congress, which takes place at RAI Amsterdam from June 20 to 23, 2018, offers a total of more than separate sessions, featuring more than 100 speakers.

Along with the opening ceremony and the final session (whose contents will be kept secret until the last minute), the big plenary lectures and special sessions include an opening lecture on technology and innovation by Dutch astronaut André Kuipers, a screening of the film Peri-implantitis and its Prevention (made by Cell-to-Cell Communications), and the EFP Graduate Alumni Symposium.

Throughout most of the four days of the congress, there will be six simultaneous sessions, plus sessions and workshops organised by the EuroPerio9 sponsors (of which there are now 23).

There will be a series of sessions on “critical factors” in periodontology, implant surgery, regeneration, and osseous defects, together with sessions on understanding periodontitis, peri-implantitis, and the associations between periodontal disease and systemic diseases (diabetes and cardiovascular disease).

Those devoted implant dentistry will tackle such topics as saving bone, bone reconstruction after implant loss, the etiopathogenesis of peri-implantitis, and innovations in implant therapy.

Sessions whose topics combine periodontology and implant dentistry include a double session with news from the World Workshop on Classification, new perspectives in regeneration, and the global burden of disease.

The Master Clinician/Periodontal Specialist Forum will explore in depth the latest advances in diagnostics, critical factors for long-term success, the microbiome, and the periodontal-orthodontal interface, among other topics.

The Research Sessions, which take place throughout the congress, will features scientific presentations from researchers selected through the process of abstracts submissions during the autumn. Under the EuroPerio9 call for abstracts, the abstracts may be presented between September 25 and November 28.

The Team Sessions, which are programmed for the whole dental team, will focus on topics including the prevention of periodontitis and peri-implantitis, challenges in practice, the role of nutrition, perio and obesity, halitosis, and the future role of the dental team.

The scientific programme also includes a debate on the use of adjunctive systemic antibiotics in the context of the global threat of antibacterial resistance, a “nightmare session” that will explore the most difficult cases that periodontists can treat, a 3D session on reconstructive surgery, and (for the first time at a EuroPerio congress) live periodontal surgery.

There will also be two joint sessions on the opening day with the Japanese Society of Periodontology, which will focus on the biofilm and anti-infective therapy, and regenerative periodontal and implant therapy.

“Specialists in periodontology and implantology, general dentists, dental hygienists and dental care professionals, as well as academics, will all find sessions of interest in the programme,” said Michèle Reners, chair of the EuroPerio9 organising committee.

“We are preparing a great perio show in one of Europe’s most exciting cities – Amsterdam! In June, the weather is really nice and lots of activities are planned. I am sure even the family will be happy to come along too and appreciate discovering this great city.”

This “First Announcement” of the scientific programme will be followed by a second announcement with details of all the speakers. This is due to be published in August.

As well as the programme of lectures and workshops, the congress features an extensive exhibition – with 51 exhibitors, in addition to the sponsors’ booths, already confirmed – and an attractive social programme including the always popular Congress Party. And, of course, opening and closing ceremonies that will live long in the memories of those who attend EuroPerio9.