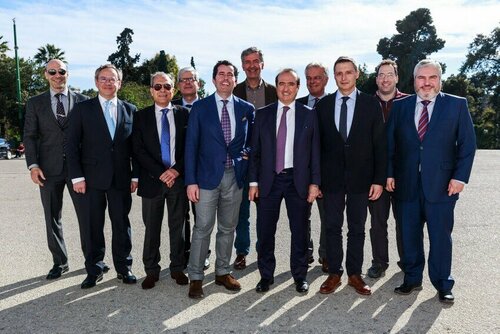 The Hellenic Society of Periodontology held its 13th Symposium of Periodontology in Athens from March 15 to 17, where more than 200 dentists from Greece and beyond listened to presentations from six expert speakers from Spain and Italy.

The first day of the symposium featured joint presentations from Silvia Roldán and David Herrera (both from Madrid, Spain) which covered: “Relevance of periodontitis, thinking beyond the dental practice,” concerning the overall burden of this disease on health (from both personal and public-health perspectives),  “Benefits of periodontal treatment: what we can achieve with periodontics?”, and the problem of oral malodor and what the dentist should know.

Prof Herrera, professor of periodontology at Madrid’s Complutense University, is scientific chair of EuroPerio10 and will next year become chair of the EFP’s workshop committee.

New EFP president Filippo Graziani (University of Pisa, Italy) then gave a talk on the efficacy of non-surgical treatment of periodontitis and its limits, and the first day was completed with a presentation by Mario Roccuzzo (University of Turin, Italy) on the topics of "Peri-implant keratinised tissue: aesthetics or function?" and "Vertical bone augmentation: function or aesthetics?"

On the symposium’s second day, Mariano Sanz, professor of periodontology at Madrid’s Complutense University and chair of the EFP workshop committee, gave a presentation on the new classification of periodontal and peri-implant diseases and conditions, as developed by the EFP and the American Academy of Periodontology (AAP).

The last day of the symposium featured four talks: Prof Herrera on "The role of antimicrobials in peri-implant therapy," Dr Roldán on "New concepts in diagnosis and management of peri-implant diseases," Prof Sanz on "Regeneration of peri-implant defects," and Dr Zabalegui on "Management of soft-tissue defects around implants."

The Hellenic Society of Periodontology described the symposium as “an unqualified success” and said that it had received “exceptional feedback” from dentists who had taken part over the three days. It also expressed gratitude for the support provided by the event’s 15 sponsors.