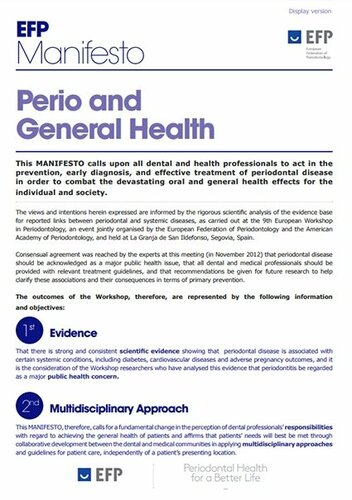 The number of signatories to the EFP Manifesto “Perio and General Health" is approaching one thousand, with support coming from all over the world.

The manifesto is a clear declaration of the links between periodontal disease and various systemic diseases and a call to action for the prevention, early detection, and treatment of periodontitis.

There has been a 25% increase in the number of signatories to the EFP Manifesto over the last 18 months. A total of 936 individuals from 74 countries have now signed the manifesto, comprising 242 institutions and companies and 694 individuals.

While most signatories are based in Europe, the Manifesto has attracted support from six continents. There are signatories from countries including Argentina, Australia, Brazil, Canada, Egypt, India, Indonesia, Peru, Mexico, Saudi Arabia, the United Arab Emirates, and the USA.

Many EFP-affiliated national societies have promoted the Manifesto as part of their activities for European Gum Health Day, the annual awareness day held on May 12.

The EFP Manifesto is based on the conclusions of the 2012 IX European Workshop in Periodontology. It was the first formal declaration in international dentistry to condense years of research into the links between periodontal disease and systemic illnesses into an acknowledgement of periodontitis as a major public-health issue.

One of the systemic conditions mentioned in the manifesto is cardiovascular disease, the focus of the Perio & Cardio Workshop organised by the EFP and the World Heart Federation (WHF), which takes place in Madrid on February 18 and 19.

The Manifesto explains the evidence for an association between cardiovascular diseases and periodontitis:

The EFP invites individuals and companies and institutions involved in health care to sign the manifesto.