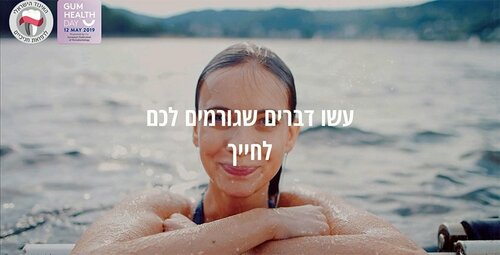 The Israeli Society of Periodontology and Osseointegration has focused on the media as the main focus of its activities for Gum Health Day.

It ran a “beautiful smile” competition on Facebook, inviting its followers to send photographs and announcing the three winners on May 12 (the winners receive tickets for a leading stand-up comedy show).

Also on Facebook, the society has been running daily posts focusing on gum health as part of a healthy lifestyle.

In addition, it is running a three-week infomercial campaign promoting gum health on four leading radio stations and there will be a television interview on a national channel about its activities.

Members of the society have also been encouraged to sign the EFP Manifesto on periodontal and general health, and the number of Israeli signatures has increased eightfold as a result.

And Gum Health Day also featured in the society’s meeting (May 16-18) in Caesarea, where there was a focus on the new classification of periodontal and peri-implant diseases and its dissemination. Speakers included former EFP secretary general Iain Chapple.