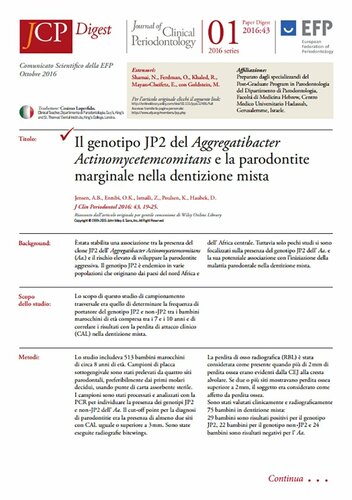 The Italian Society of Periodontology has become the first EFP-affiliated member society to directly distribute the federation’s JCP Digest research summary on its website.

The executive board of the Società Italian di Parodontologia e Implantologia (SIdP) recently decided to take the Italian version of the JCP Digest and publish it on its website and also to use social media and its own newsletter to inform members about this scientific content.

The society will start to distribute the JCP Digest in this way from the first issue of the 2016 series, which provides a summary of a study of the presence of the JP2 clone of the bacterium Aggregatibacter Actinomycetemcomitans (Aa.) among Moroccan children.

“Our Society is strongly involved in the dissemination of periodontal knowledge among specialists but also and especially among general dentists,” said Mario Aimetti, SIdP president-elect.

“With regard to the scientific evidence assessing the importance of periodontology to oral and systemic health, SidP’s prime aim is to break every ground to amplify educational and cultural divulgation in this field.”

Prof Aimetti added that the SidP was determined “to strictly co-operate with the European Federation of Periodontology in order to share and to take advantage of all the instruments which could promote and encourage knowledge related to periodontal health. The SIdP believes that its effort to disseminate the JCP Digest in the most widespread way goes in this direction.”

“We are really delighted that the SIdP, one of the largest and most dynamic European national societies is the first one to respond positively to our call for making the JCP Digest more visible to its members,” said Phoebus Madianos, chairman of the EFP’s scientific affairs committee and editor of the JCP Digest.

“We would like to encourage the other EFP member societies to also help in disseminating Perio Digest, as one of the means of spreading important current research in our field across Europe.”

In a separate move, the Israeli Society of Periodontology has agreed to disseminate the English version of the JCP Digest to its members both by sending links via email and by placing the publication on its website.