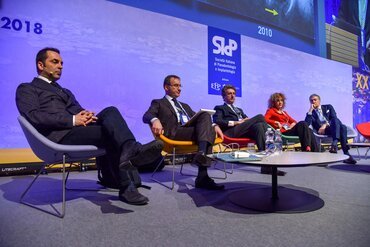 The Italian Society of Periodontology and Implantology (SIdP) held its 20th national congress from March 15 to 17 in Rimini, attended by more than 2,000 dental professionals and students.

The congress was held at the Rimini Palacongressi, under the heading “Appropriateness and prognosis: periodontology in the control room,” and its aim was to clarify, from both the biological and clinical points of view, the role of periodontology in dental therapy.

In the words of SIdP president Mario Aimetti, “In a society where ‘everything and immediately’ seems to have become a daily mantra, sometimes it can be difficult to ethically answer our patients’ demands.”

He pointed out that applying the principle of “primum non nocere” (first, do no harm), while one of the fundamentals taught in medicine and dentistry degree courses, is “still one of the major challenges in our daily practice.”

Speakers at the congress included theologian Sandro Spinsanti, who spoke about ethical treatment in dental care, and Pierpaolo Cortellini, who addressed the centrality of periodontology within the treatment plan. Panel discussion tackled topics such as appropriateness and prognosis in multidisciplinary treatments, implant therapy, and dental hygiene.

Additional events included “Lunch and Learn” sessions on Thursday, March 15 – four for dentists and three for dental hygienists – where participants sat at tables of between 10 and 12 people to have lunch while discussing topics guided by a moderator. The subjects included the timing of implant positioning related to tooth extraction, soft-tissue management in implant therapy, digital communication, and the role of the dental hygienist in the treatment of non-plaque-induced gingivitis.

There were also theoretical-practical workshops (five for dentists, one for hygienists) on the morning of Saturday, March 17, with topics including the free gingival graft, flaps and sutures in periodontology, and soft-tissue harvesting from the palate and its use in periodontology and implant therapy.

The congress was attended by 2,023 people of which 56% were dentists (mainly periodontists), 24% were dental hygienists, and 11% students.

The SIdP also launched a media initiative during the congress, a dental and gingival health internet channel in partnership with Italian news agency ANSA. The channel aims to inform people about all matters related to teeth and gums.

“Thanks to millions of pages read every month, we are convinced that this is an outstanding opportunity to help people to understand what it is right and what it is wrong, to fight fake news and thereby to increase dental and periodontal health,” said Prof Aimetti.

He added that the SIdP was very satisfied with the congress, which had been “a great success in bringing together general dentists, periodontists, dental hygienists and students and showing how and why periodontal issues are milestones in any clinical activity that is done properly, and how it is impossible to perform any dental therapy properly outside of periodontal health.”