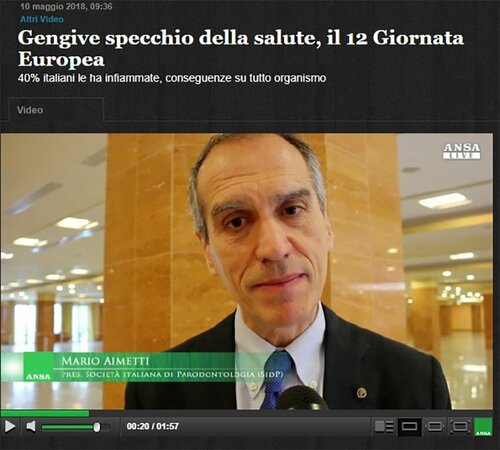 The Italian Society of Periodontology and Implantology (SIdP) celebrated European Gum Health Day 2018 by launching a campaign to inform the Italian population about the importance of preventing and treating periodontal diseases.

The campaign was based on the media kit and graphics that the EFP provided to its affiliated national societies to help them prepare their activities for May 12.

As part of this campaign, SIdP president Mario Aimetti was interviewed by the Associated National Press Agency (ANSA).

During this interview, Prof Aimetti presented Europan Gum Health Day as an opportunity to increase awareness of the prevention of gingival diseases, noting that periodontal disease is the sixth biggest global pathology in terms of prevalence and affects almost half of the adult population, with some 10-12% suffering from severe periodontitis.

He said that people suffering from periodontitis are much more exposed to cardiovascular diseases, diabetes, and other conditions that can get worse because of the increase in systemic inflammation levels.

In the ANSA interview, Prof Aimetti noted that common symptoms of periodontal disease are still underestimated and sometimes people visit the dentist only when the disease has already reached an advanced stage. He emphasised the importance of preventing periodontal disease by going to the dentist before there are any signs of disease and of asking for specialist intervention when periodontitis occurs so that effective and efficient treatments can be carried out.

The SIdP has a partnership with this agency and since January has provided material for a dental and gingival health channel on the ANSA website. This channel also published several articles related to European Gum Health Day.

In addition, information sent by the society was published in dental journals and on other websites, as well as on the SIdP’s own website, on its www.gengive.org website addressed to the general population, and on its various social-media outlets.