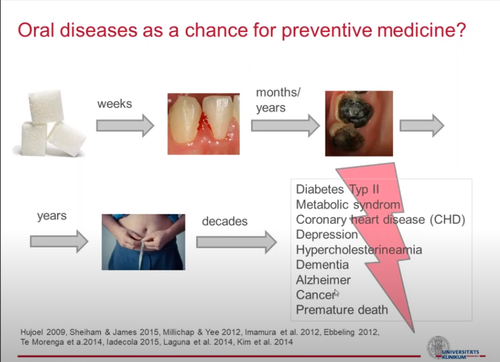 The latest two EFP Perio Sessions live webinars attracted wide international audiences to expert presentations on two increasingly important topics in periodontology – the use of L-PRF concentrates and the role of diet.

On 18 June, Andy Temmerman (Catholic University of Leuven, Belgium) explained the latest developments in the use of leukocyte- and platelet-rich fibrin (L-PRF) in periodontology and implant dentistry.

And then on 25 June, in the ninth and final webinar of the inaugural series of EFP Perio Sessions, Johan Wölber (University Clinic Freiburg, Germany) discussed the role of diet in preventing and treating periodontal diseases.

Prof Temmerman’s webinar, viewed in 47 different countries, was introduced and moderated by Mark Ide (immediate past president of the British Society of Periodontology), who said “this is a topic that has been on the side lines to a degree but has slowly been increasing in popularity and interest within the profession, and certainly we would all benefit from some up-to-date information and some real detail on what we can and can’t do with these sorts of technologies.”

Andy Temmerman explained how “second generation” platelet concentrates (such as L-PRF) have gained considerable attention in recent years in wound healing and tissue regeneration, overcoming the problems that affected the first generation, which were very expensive and involved a difficult preparation protocol.

He observed how PRF is “a 100% autologous product which might be used beneficially in various tissue regeneration therapies” and that the preparation protocol is “fairly easy (and inexpensive) when certain aspects are taken into account.”

However, despite a “very considerable” amount of literature, he said that there was still a need for a well-conducted randomised controlled trial (RCT) of the use of L-PRF in the field of periodontology and implant dentistry.

As a result, “there should not be a variety of preparation protocols at the moment. Why don’t we stick to the original protocol so that everyone uses the same protocol so that we are able to compare our results in studies and also in the clinical fields?”

Andy Temmerman had previously contributed to the article “L-PRF: a dream or the future of bone regeneration?”, published in the EFP magazine Perio Insight in May 2019.

He cited a clinical study showing that average pocket probing depths and bleeding on probing were lower in vegetarians compared with non-vegetarians, and mentioned studies that showed that vegetarians have higher levels of anti-inflammatory antioxidants in their blood.

He added that antioxidants – contained in most plants and especially in berries, vegetables, red wine, green tea, coffee, and spices – can counteract oxidative stress and there is solid evidence of several anti-inflammatory effects on gingival inflammation.

He highlighted the dietary features that seem optimal for oral and general health:

Talking to patients about diet – and in particular about avoiding sugar – can maybe “break the chain” that leads to gum disease, caries, being overweight, and potentially serious diseases including diabetes, coronary heart disease, dementia, and cancer. “This could be a real contribution by dentistry, by dental professionals, for general health,” he concluded.

Johan Wöbler’s EFP Perio Sessions webinar was the ninth of a series that started in April as a response by the EFP to the COVID-19 crisis, to provide clinicians at home with continuing education, featuring presentations from leading scientists and clinicians on key topics in periodontology and implant dentistry.

“In this very strange and difficult period, it was crucial for the executive committee of the EFP to stay close to all our members and our national societies,” said Xavier Struillou, EFP president. “These two periods of free-of-charge webinars – during the lockdown and after – were dedicated to all periodontists and covered all the aspects of our speciality: periodontal research and new approaches in clinical practice. All the sessions were very successful thanks to our incredible speakers and moderators and to the high scientific content of the presentations.”

He added that in September “we will begin a new cycle of webinars on various topics with a new format.” In the meantime, seven of the nine webinars can be viewed in a special playlist on the EFP’s YouTube channel.