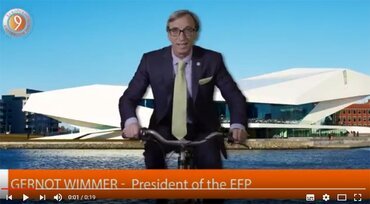 The series of videos feature the participants on bicycles in front of backdrops featuring scenes from Amsterdam, the host city of the June 2018 congress, using the slogan “Let’s get moving for EuroPerio9”.

There are videos featuring the presidents presidents (or other committee members) of the EFP-affiliated national perio societies of Austria, France, Finland, Germany, Israel, Lithuania, Portugal, Romania, Russia, Spain, Ukraine, and the United Kingdom.

More videos featuring other societies will be added in the coming weeks. There is also a video which offers a compilation of the messages from various national-society representatives and the EuroPerio9 organisers.

The videos have been designed to be used by the EFP and the national societies to promote EuroPerio9, and are ideal for sharing via social media.