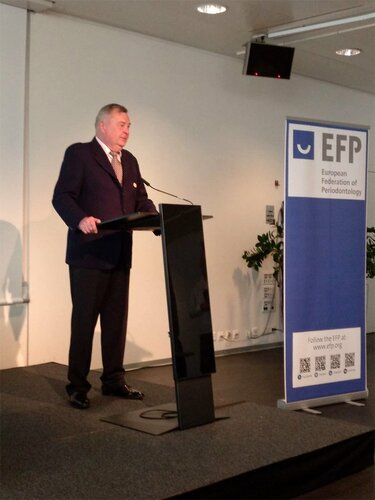 The EFP has awarded its Distinguished Service Award to Michel Brecx (Belgium) in recognition of his work for the federation over many years.

The award is presented annually to a member of an EFP-affiliated national society of periodontology who is selected for distinguished service to the federation in more than one area over a period of at least 15 years.

Prof Brecx was presented with the award by Anton Sculean, EFP president 2018-19, at the EFP’s general assembly in Bern, Switzerland, on March 30,

In proposing Michel Brecx for the award, the Belgian Society of Periodontology highlighted his extensive career with both the national society and the EFP, which included:

“He played an important role in our scientific community and significantly contributed to the scientific knowledge in periodontology with over 150 publications,” noted the nomination from the Belgian Society of Periodontology. “Furthermore, his extensive teaching contribution in pre- and post-doctoral programmes in Europe, America and Africa is evidence of his passion and dedication to periodontology.”

“Michel Brecx was the first EFP Treasurer from 1992, when he established banking in Luxemburg and managed life without the euro, which meant so many different currencies to negotiate for membership fees and other EFP transactions – hard to believe today,” said Iain Chapple, EFP secretary general 2016-19.

“Michel is a very humorous and passionate guy, a real EFP stalwart and someone we owe a lot to as one of the founders of this great federation.”