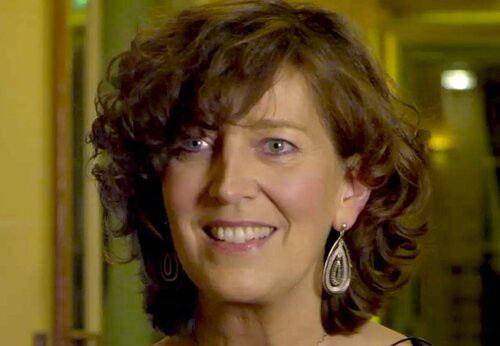 Outgoing EFP President Michèle Reners has pointed to the Federation's work with national societies as a highlight of her period of leadership, urging the exchange of ideas between societies and the importance of understanding their needs.

Dr. Reners, who handed over the reins of the EFP to Phoebus Madianos at the March General Assembly, also underlined the challenge to bring younger figures to the fore and predicted a greater role in the Federation for women.

"For me, a major part of the President’s role is to meet the members." said Dr. Reners. "I visited the Ukrainian, Spanish, French, and Belgian Societies, and I realised that their needs were all very different." she added.

On her visit to Ukraine, the then President, returned impressed by the "enthusiasm and dynamism" of the Society.  She realised "how much is expected of the EFP and how important it was to organise the strategic plan and working groups the Federation now boasts as part of its efforts to support national societies."

"I also met the Russian delegation and they explained to me their desire to be part of the EFP. Their candidature has been accepted at the General Assembly in Brussels," explained Dr. Reners.

The Belgian specialist's one year in office coincided with the introduction of a new strategic plan for the Federation and she stressed the benefits of this in developing the organisation. Dr. Reners believes "the most progress has been made in communication, and we have the External Affairs Committee to thank for that."

Youth and younger EFP figures are coming up in the organisation, much to Dr. Reners' delight. "I have always believed that we had to incorporate younger people in the different committees," she said. "The challenge now for the EFP is good integration of "junior" officers."

At the EFP Postgraduate Symposium in Lommel (Belgium), Dr. Reners met students as they gathered to present the results of their clinical and  scientific work.

"These exchanges stimulate reflection and help to open the mind," she stated.

An increase in the presence of female speakers at EFP events is another aspect Dr. Reners believes will develop from now on. "At EuroPerio, women are usually well represented but the EFP has to take care on this point. I have some ideas and projects with women from different countries," she explained.

"It is a fact that the dental profession is feminising, so women have a nice future in the dental world, and more specifically in the Perio world, and particularly within the EFP" she continued.

Dr. Reners became a member of the EFP Executive Committee in 2010. Although her Presidency is over, she will continue to make her voice heard. Together with the new President Phoebus Madianos and President-elect Soren Jepsen, Dr. Reners helped design roles for Executive Committee members. "From now on each elected member has a particular task; my role as past President is to support and help the current President," she said.

"I don't know if the EFP will need me any longer, but time will tell," concluded Dr. Reners.