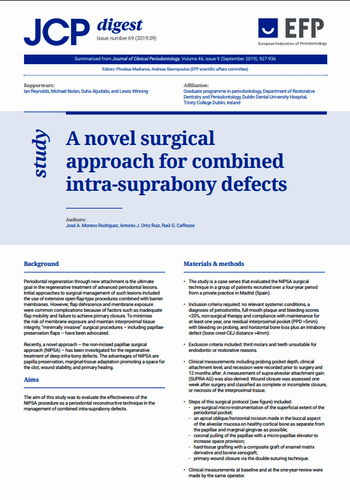 There are promising results from a new technique for the regenerative treatment of deep intra-bony defects: the non-incised papillae surgical approach (NIPSA).

A group of patients recruited over four years from a private practice in Madrid (Spain) who received NISPA treatment showed significant supra-alveolar attachment gain (SUPRA-AG), according to a study summarised as JCP Digest No. 69.

The various steps involved in the NISPA protocol include:

Researchers concluded that the novel approach used in this study demonstrated positive results in all clinical parameters measured and showed favourable rates of primary closure.

However, they cautioned that the case-series design of the study limited the ability to make generalisations about the findings to the wider population. The lack of a control or comparison group also limited interpretation of the results.

They said that randomised controlled clinical trials (RCTs) were required to investigate NISPA’s efficacy in comparison with other established techniques in periodontal regenerative surgery.

The research, published in the Journal of Clinical Periodontology in September, was summarised for JCP Digest by postgraduate students of the programme in periodontology at Trinity College Dublin in Ireland.