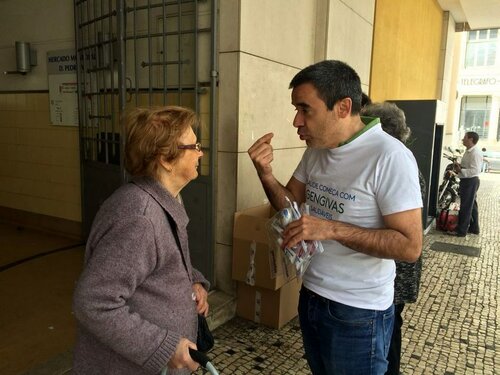 The main activity staged by the Portuguese Society of Periodontology and Implants (SPPI) for European Gum Health Day 2018 on May 12 involved dental students handing out leaflets in three cities.

Susana Noronha, the society’s president, gave an interview on the Canal S+ television channel, which is dedicated to general health. The 30-minute interview was broadcast on Friday May 18.

The society also obtained coverage for European Gum Health Day in various Portuguese dental magazines. In addition, in a five-week run-up to the awareness day, the society published a different image every week on its website and Facebook page, as well as videos featuring two Portuguese periodontal specialists, Helena Rebelo and Ricardo Faria e Almeida:

Speaking of the street campaign, Susana Noronha said: "We had the opportunity to verify a fantastic collaboration of the Portuguese population."