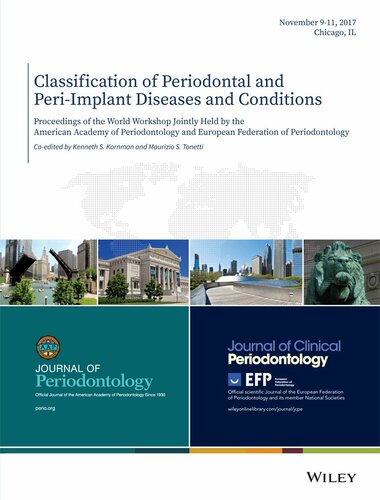 The proceedings of the World Workshop on the classification of periodontal and peri-implant diseases and conditions have been published online as a special supplement of the EFP’s official scientific publication, the Journal of Clinical Periodontology (JCP).

The World Workshop, held in Chicago in November 2017, was organised jointly by the American Academy of Periodontology (AAP) and the EFP to create a consensus knowledge base to enable the two organisations to promote a new classification globally.

The findings of the workshop will be presented formally for the first time at a special session at EuroPerio9 – News from the World Workshop – on Friday 22 June.

As well as being published as a JCP supplement, the proceedings have simultaneously been published by the AAP’s Journal of Periodontology.

The World Workshop involved 110 experts who reviewed the scientific evidence and sought to update the classification scheme in line with the current understanding of periodontal and peri-implant diseases and conditions.

There are big changes since the previous classification, made in 1999, which reflect the way that the scientific understanding of periodontal and peri-implant diseases and conditions has evolved since then.

Among the most significant differences in the new classification are that peri-implant diseases and conditions are considered for the first time, and the distinction between “chronic” and “aggressive” periodontitis has been replaced by a model based on staging and grading.

The JCP supplement, which runs to almost 300 pages, summarises the proceedings of the World Workshop, and features 19 review papers and four consensus reports from each of the four workgroups.

Review authors and the workgroups were asked to establish pertinent case definitions and to provide diagnostic criteria to aid clinicians in the use of the new classification. All findings and recommendations of the workshop were agreed by consensus.

“This was a huge undertaking but one of vital importance, ensuring that an international language for clinical care, research, and education is established, and updating the 1999 classification system to account for rapid advances in scientific knowledge over the last 20 years,” said Iain Chapple, EFP secretary general who co-chaired the workshop’s workgroup 1.

As well as the consensus report from this group, the JCP supplement includes review papers on:

Workgroup 2 considered periodontitis and its consensus report outlines the lack of evidence for the distinction between “chronic” and “aggressive” periodontitis and explains a new approach based on four stages and three grades.

The stages, are based on severity and complexity of management, are:

Stages are assessed in terms of extent and distribution as: localised, generalised, and molar-incisor distribution.

The grades express the evidence or risk of rapid progression and the anticipated treatment response. The grading of A, B, or C is according to slow, moderate, or rapid rate of progression. The grading considers risk factors such as smoking and the presence of concomitant diseases, such as diabetes.

Alongside the consensus report, there are review papers on:

Workgroup 3 was tasked with considering periodontal manifestations of systemic diseases and developmental and acquired conditions. Its consensus report describes the finding that there are rare systemic conditions (such as Papillon-Lefèvre Syndrome and leucocyte adhesion deficiency) that have a major effect on the course of periodontitis and more common conditions (such as diabetes mellitus) with variable effects, as well as conditions such as neoplastic diseases) that affect the periodontal apparatus independently of dental plaque biofilm-induced inflammation (such as neoplastic diseases).

The group’s conclusions include that diabetes-associated periodontitis should not be regarded as a distinct diagnosis, but diabetes should be recognised as an important modifying factor and included in a clinical diagnosis of periodontitis as a descriptor.

The consensus report offers an updated classification of the periodontal manifestations and conditions that affect the course of periodontitis and the periodontal attachment apparatus, as well as of developmental and acquired conditions. Alongside this report are reviews on:

The consensus report notes strong evidence from animal and human experimental studies that plaque is the aetiological factor for peri-implant mucositis. It also notes that the evidence is equivocal regarding the effect of keratinised mucosa on the long-term health of the peri-implant tissue.

This report provides cases definitions for both clinical practice and researchers but cautions that these should be viewed within the context that there is not generic implant but numerous implant designs with different surface characteristics and varying surgical and loading protocols. The report is accompanied by review papers on:

“The new classification should provide a globally consistent approach to diagnosis and management and ultimately improve outcomes for our patients,” said Prof Chapple. “Next steps include careful education of the oral-healthcare team to ensure its simplicity is recognised – as, at first glance, the classification may appear complex but it is actually quite pragmatic – and to make sure we train effectively in its implementation.”

The new classification is explored in depth in the recently published edition of the EFP magazine Perio Insight, with articles by the four EFP co-chairs of the World Workshop’s workgroups: Iain Chapple, Mariano Sanz, Søren Jepsen, and Tord Berglundh.