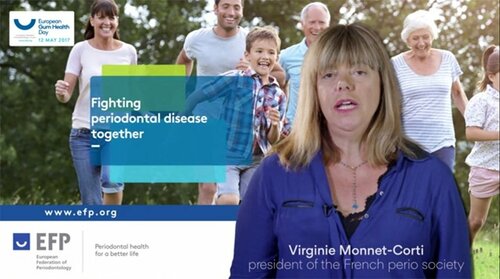 The EFP and its affiliated national societies of periodontology are making extensive use of social media as they spread the message of “Fighting periodontal disease together”, the slogan of European Gum Health Day 2017.

YouTube videos, Facebooks posts, tweets, and updates on LinkedIn are part of the extensive package of social-media activity that has been organised to communicate the May 12 awareness day’s messages about gum disease and gum health. All the social-media activity is taking place under the hashtag “#perioday.”

The EFP produced a series of short videos promoting European Gum Health Day, featuring the presidents and EFP delegates of the 26 national participating national societies. The videos were shot in Santiago de Compostela (Spain) during the EFP general assembly last month and have been published on the EFP’s YouTube channel, and distributed via Facebook, Twitter, and LinkedIn.

In the run-up to May 12, the number of posts and tweets has been increased to three per day and a new tool (an algorithm from social-media management specialists buffer.com) has been used to ensure that these are published at the best possible times to ensure maximum impact.

In the week leading up to European Gum Health Day, the EFP’s social-media pages have posted “count-down” graphics showing the number of days left until the event.

On May 12, the EFP’s social media pages will publish information about the events organised by the national societies, as these take place throughout the day in 26 different countries.