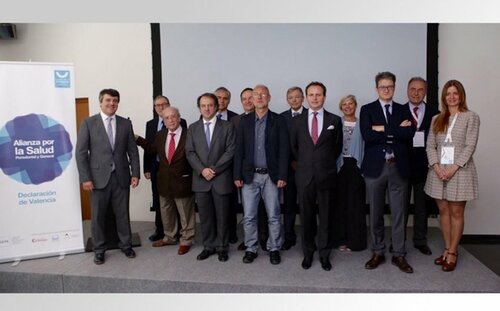 The aim of the new initiative is to strengthen bonds between the dental community and other healthcare professionals in order to improve the prevention and early diagnosis of periodontal diseases, and to treat these diseases in the context of their potential consequences for general health.

The Alliance seeks to advance in three specific fields: the provision of information to the general public, multidisciplinary integration, and investigation (including interdisciplinary approaches). It will place the emphasis on the important role that the dental practice can play as a centre to promote general health and prevent disease.

“With the conviction of the huge importance of the available scientific evidence and the benefits derived from the actions that will be presented to the population, it is clear that the time is right to move to action, together with other interest groups,” said SEPA president David Herrera.

The official presentation of the Alliance for Health, on May 12, took place within the 50th annual congress of the Spanish perio society in Valencia.

The promotors of the alliance have invited all health professionals, scientific bodies, and public institutions who share the health-promotion objectives of this initiative to join it by supporting the “Valencia Declaration”, a manifesto which has already been signed by health authorities, medical and dental scientific societies, universities, and professional organisations of dentists and dental hygienists.

The Alliance will work on two specific fronts: highlighting and strengthening the role of the dental consultancy in disease prevention, and promoting periodontal health within the public-health system.

On the first front, there will be training and qualification activities for dentists and dental hygienists “in order to strengthen their skills and develop the dental practice as a space for the primary prevention of non-communicable diseases, especially cardiovascular disease and diabetes, as well as in the fight against smoking and the promotion of healthy lifestyles,” said Adrián Guerrero, SEPA vice-president and president-elect.

On the second front, the aim is to integrate the promotion of periodontal health into the portfolio of services offered by the public-health system, at least in relation to three specific groups: people with diabetes, people at high risk of cardiovascular disease, and pregnant women.

To develop this initiative and put it into practice in the coming years, a strategy has been drawn up which focuses on six specific areas:

The Valencia Declaration is the fruit of the growing scientific evidence of the links between gum health and general health and draws on the EFP Manifesto: Perio and General Health, a call to action on the prevention, early diagnosis and treatment of periodontitis, which condenses years of research on the links between periodontal disease and systemic illnesses.

The 50th SEPA congress, held alongside the society’s sixth meeting for dental hygienists, took place from May 12 to 14, and was attended by more than 4,000 oral-health professionals (a record number, which exceeded the society’s initial “optimistic” expectation of 3,500 attendees).

The congress featured more than 250 scientific communications and involved more than 100 national and international speakers, while 80 companies took part in the commercial exhibition (ExpoPerio).

“SEPA is one of the most prestigious societies that we have in the European Federation of Periodontology,” said Juan Blanco, the recently elected president of the EFP. “Spain is at the forefront of European periodontology and SEPA is a model to follow within the federation.”