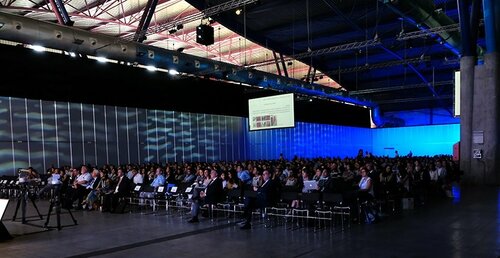 The 51st annual congress of the Spanish Society of Periodontology and Osseointegration (SEPA) brought together around 4,500 periodontists and other oral-health professionals in one of the biggest gatherings of its kind outside the EFP’s triennial EuroPerio congresses.

Delegates came from 40 different countries to the Malaga Trade Fairs and Conference Centre to hear 150 speakers in 85 sessions over three days (May 25 to 27).

Under the heading “Responses to new challenges”, SEPA Malaga 2017 provided attendees with presentations from many global experts in periodontology and other dental specialities.

The event started with a live transmission of implant surgery, carried out in a Munich clinic by Dr Markus Hürzeler, with commentary in the auditorium from Dr Otto Zuhr.

The congress had a strong emphasis on multidisciplinary approaches, including the Ortho-Perio Symposium, which brought together periodontists and orthodontists to discuss clinical approaches for patients who need both kinds of treatment, and the SEPA-Osteology Foundation Symposium, which focused on hard and soft tissues in implantology in the anterior aesthetic sector.

There were also presentations from specialists in aesthetics, prosthetics, and rehabilitation and from experts in periodontal restoration in aesthetic zones.

The SEPA congress also included the Alliance for Health Symposium – organised in collaboration with the Spanish societies of cardiology and diabetes, together with the societies of primary care and of family doctors – which focused on the links between periodontal health and systemic health.

SEPA Malaga 2017 was, in fact, three congresses in one, combining SEPA Multidisciplinary Periodontology (the main event) with SEPA Oral Hygiene (for dental hygienists) and SEPA Management and Healthcare Excellence (focusing on business and management issues).

There was also an exhibition, ExpoPerio, which offered more than 100 stands and a total space of more than 6,000 m2. Organisers estimated that the direct and indirect benefit of SEPA Malaga 2017 to the city of Malaga was more than €1.5 million.

Outreach activities for the public – under the slogan “Cuida tus encías” [Take care of your gums] – took place in the streets of the city.

SEPA, which has published a short YouTube video with images from the Malaga congress, is now preparing for next year’s meeting, which will take place in Seville from April 12 to 14.