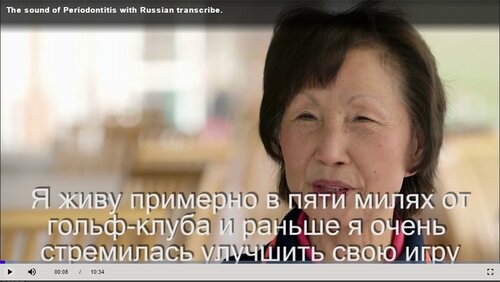 The audience for the EFP-backed documentary The Sound of Periodontitis is growing, as more subtitled versions are launched to extend the reach of this pioneering video which offers the patient’s perspective on periodontal disease.

A version with subtitles in Russian is now available via the EFP website, joining versions in French, Spanish and Croatian. Versions in other languages – including Polish and Estonian – are in the pipeline.

The Russian version was put together by Tatjana Kashunina, a periodontist in Estonia (where up to 25 per cent of the population have Russian as their native language). She is now preparing the Estonian version.

“Periodontology has started to gain strength here in Estonia only in the last ten years and people here are starting to know more about periodontal diseases,” said Dr Kashunina.

“This strong video shows how problems with the gums influence the lives of several people. This video can help many people realise that gum disease is a very serious problem that can cause the loosening and loss of teeth. I believe this video will motivate our patients to recognise inflammation in the gums as soon as possible and to start searching for qualified help on time.”

Any national society wishing to do this should contact Monica Guinea, the EFP’s European Co-ordinator (monica@efp.org).

First shown at EuroPerio8 in London in June 2016, The Sound of Periodontitis follows four patients who talk about their experiences of periodontitis, peri-implantitis and periodontal treatment.

“It is very exciting to see how this project continues to grow,” said Ian Needleman, professor of restorative dentistry and evidence-based healthcare at the UCL Eastman Dental Institute and president elect of the British perio society.

“Gum disease is very common across the globe and affects many peoples’ lives. Translating the film into Russian could reach millions of people and hopefully help to improve life quality and well-being.”