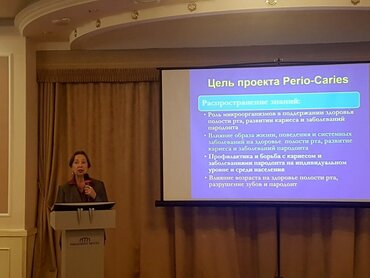 The Ukrainian Society of Periodontists presented a report based on the EFP’s Perio & Caries project at the 5th National Ukrainian Dental Congress in Kiev, held on October 18 and 19.

Addressing the congress, which focused on prevention in dentistry and the role of the dentist in preventing major dental diseases, the society’s president Galyana Biloklystska outlined the project’s proposals.

“It is especially important for us to attract the attention of our government to the problems of the high incidence of major dental diseases – caries and periodontal diseases – not only in children and adolescents, but also in the gerontological population, which, unfortunately, is completely forgotten,” Prof Biloklytska’s report stated.

She added that it was important to study not only the role of microorganisms in maintaining the health of the oral cavity and the development of caries and periodontal diseases, but also the influence of lifestyle, behaviour, systemic diseases, and age.

“We want to believe that our renewed government, where young people begin to dominate, will begin to think of their parents and grandparents, who often by the age of 50 are suffering from disabilities due to the early loss of teeth, which leads not only to disruption of aesthetics and the loss of functions of the tooth-jaw system, but also becomes the cause of the development of various chronic non-infectious pathologies, ranging from diseases of the cardiovascular system and ending with diseases of the gastrointestinal tract, and others,” she told the congress.

The Ukrainian Society of Periodontists has proposed including a rehabilitation programme in the national dental-disease prevention programme which seeks to maintain mental health in elderly people. There is very high prevalence of generalised periodontitis (95.7%) and dental caries (95.1%) in this age group.

Prof Biloklytska also told the congress of the need to adopt the new classification of periodontal and peri-implant diseases and conditions, developed by the EFP and the AAP (American Academy of Periodontology).

“This classification should be urgently included in all dental training programmes at the undergraduate level of higher educational establishments of a medical profile and institutions of postgraduate education of Ukraine,” she said, also calling for the recognition of periodontology as a speciality.

“The recognition of the speciality of periodontology will allow us to raise the level of highly specialised periodontal care at different levels, making it possible to reduce the high incidence of periodontal diseases among the population of Ukraine, and helping to preserve and restore dental health and the quality of life of our compatriots.”