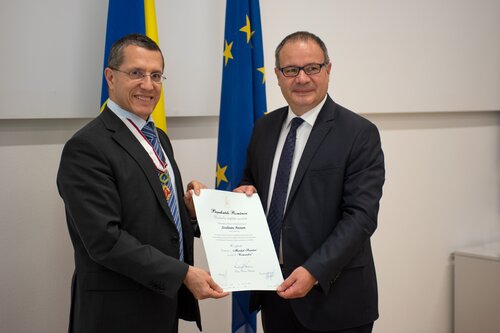 Anton Sculean, EFP president in 2018-2019, has been awarded one of the top honours of his native Romania, the National Order of Merit, Commander.

The National Order of Merit recognizes important services rendered to Romania through outstanding achievements in fields such as science or the arts. The number of members of this order – who are referred to Knights of the Order of Merit – is limited. Originally awarded by the country’s king it is now given by the Romanian president.

The award was handed to Prof Sculean in the name of Romanian President Klaus Werner Iohannis by Vlad Vasiliu, the Romanian ambassador in Switzerland, in a ceremony at the Felix Frey auditorium of the Swiss Institute for Translational and Entrepreneurial Medicine at the University of Bern on 19 May.

Anton Sculean is professor and chair of the Department of Periodontology and head of research of the School of Dental Medicine at the University of Bern. He was the scientific chair of Perio Master Clinic 2000 and is chair of the organising committee for EuroPerio11 (Vienna, 2025).

“I was humbled and deeply honoured to receive the Romanian Order of Merit, Commander, one of the highest distinctions for scientifical and medical achievements given by the Romanian State, my country of birth,” he commented. “I am extremely grateful to Dr. Vlad Vasiliu, the Romanian Ambassador in Switzerland, who personally handed over this distinction in the name of the Romanian President Klaus Werner Iohannis.”

In 2020, Prof Sculean received the Distinguished Scientist Award for Research in Periodontal Disease of the International Association for Dental Research (IADR).

He was recently appointed as the new editor-in-chief of Periodontology 2000, the leading scientific magazine in the dental sector. On June 17, he will perform live recession-coverage surgery online in the “Osteology-EFP Virtual Live Surgery Day”, a special event organised by the EFP and the Osteology Foundation.