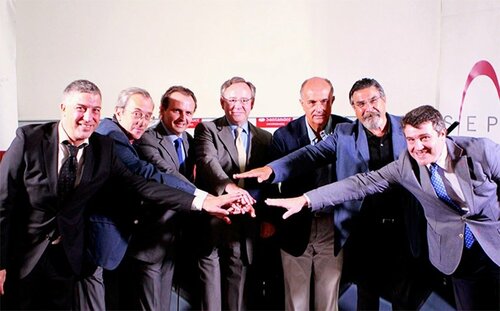 Mariano Sanz, chair of the EFP’s workshop committee, and Filippo Graziani, elected member of the federation’s executive committee, took part in a three-day summer course at the Complutense University of Madrid organised in conjunction with the Spanish Society of Periodontology and Osseointegration (SEPA).

The course, on the importance of multidisciplinary collaboration to periodontal and general health, was created around the Alliance for Periodontal and General Health, launched last year by SEPA in partnership with scientific societies in various disciplines (cardiology, endocrinology and nutrition, internal medicine, and primary healthcare).

The “Alliance for oral and general health: future perspectives” course was directed by Prof Sanz, chair of the dental faculty at the Complutense University, with David Herrera, professor of periodontology at the university and scientific chair of EuroPerio 10 as secretary, and co-ordinated by Javier García, executive director of SEPA.  It was sponsored by the SEPA Foundation, Dentaid, and Johnson & Johnson, with the collaboration of Oral-B, Sunstar, and Straumann.

2. Information: educational and outreach work among oral-health and other health professionals, influencing the care and information given to patients through a multidisciplinary approach;

3. Integration: multidisciplinary integration within the framework of scientific and institutional co-operation, including the creation of protocols and clinical guides that are supported and promoted by public-health authorities.

Filippo Graziani’s lecture was entitled “What do we know and what we don’t we know about the association between periodontitis and diabetes?”

Profs Sanz and Graziani also participated (as moderator and panellist respectively) in a round-table discussion about research, exploring what is known today and what remains to be discovered.

Prof Herrera’s lecture covered the biological rationale behind the association of periodontitis and systemic diseases, while Elena Figuero, an associate professor at the Complutense and EuroPerio9 ambassador to Spain, addressed the links between periodontal diseases and adverse pregnancy outcomes.

In his presentation, Dr Anguita said that cardiologists needed to increase their patients’ awareness of the importance of periodontitis as a risk factor for cardiovascular diseases.

Dr Llisterri told the students that “family doctors can have a great impact on improving the oral health of the population through the screening for periodontal disease in primary care.”

The summer course was attended by 32 students, but its content will have a more far-reaching impact, as all the proceedings have been recorded on video and will be broadcast on the soon-to-launch SEPA TV, a subscription-based internet-television service. SEPA expects that more than 1,000 students will be reached in this way.

“I think the course was outstanding,” said Filippo Graziani. “We had time to spend an entire day dedicated to presenting the evidence that links periodontitis with diabetes, cardiovascular disease, and adverse pregnancy outcomes.

“What was pleasant about this course was that we had a long debate – a two-and-a-half-hour round table – in which we addressed the evidence that we have, but most importantly we addressed the lack of knowledge. We closed the debate trying to see how we could design research to fill in those gaps.”

For SEPA, Adrián Guerrero said: “The Alliance of Periodontal and General Health is a clear example of the interdisciplinary co-operation that is needed. We are following the guidelines of the EFP Manifesto: Perio and General Health, increasing knowledge of the public-health problem represented by periodontal diseases.”