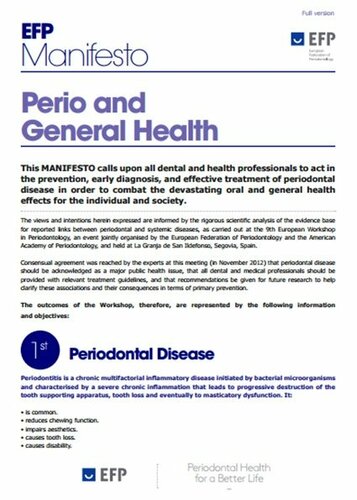 The EFP Manifesto “Perio and General Health" – a call to action for the prevention, early detection, and treatment of periodontitis – has now received more than 1,100 signatures from individuals and institutions all over the world.

The signatories come from a total of 79 countries in six continents, reflecting the EFP’s growing global influence. Several EFP-affiliated national societies actively promoted the Manifesto as part of their activities for European Gum Health Day on May 12.

Based on the conclusions of the 9th European Workshop in Periodontology, the Manifesto is the first formal declaration in international dentistry to condense years of research into the links between periodontal disease and systemic illnesses into an acknowledgement of periodontitis as a major public-health issue.

The EFP invites individuals, together with companies and institutions involved in health care, to sign the manifesto and join a growing community of professionals and experts who seek a fundamental shift in the perception of dental professionals’ responsibilities.