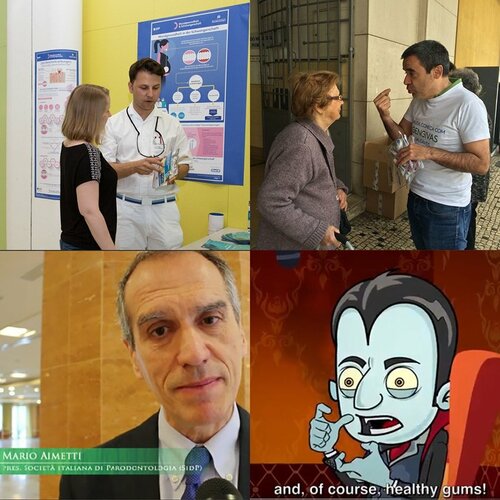 European Gum Health Day 2018, the international awareness day promoted by the EFP and organised by its affiliated national societies of periodontology, has proved a resounding success with activities carried out in more than 40 countries.

Under the slogan “Health begins with healthy gums”, events held to commemorate the May 12 awareness day included free periodontal screenings, mobile dental clinics, conferences, outreach visits to schools, and the publication of a report on the impact of smoking on periodontal and peri-implant disease.

There was a huge amount of media activity, as EFP-affiliated societies targeted the press and social media, and released their own videos to drive home the key message about the importance of gum health to overall health and well-being.

On top of activities organised by 29 of the EFP’s 30 affiliated societies, this year’s event also included the participation of 10 periodontology societies from Latin America. In addition, universities in Brazil and a dental school in Georgia also organised events linked to European Gum Health Day 2018, the fifth annual awareness day co-ordinated by the EFP.

Activities carried out for European Gum Health Day 2018 include:

Austria: Three board members of the Austrian Society of Periodontology gave an interview about periodontitis and prophylaxis and the society’s press release about European Gum Health Day was distributed by the country’s main news agency. Information booths were set up at dental schools in Vienna and Graz,

Finland: An article by Mervi Gürsoy about periodontitis and adverse pregnancy outcomes, which also highlighted European Gum Health Day 2018, was published in the journal of the Finnish Dental Society.

Israel: The Israeli Society of Periodontology and Osseointegration released three videos about gum health that aim to raise awareness among patients about different periodontal treatments.

Italy: The Italian Society of Periodontology and Implantology (SIdP) launched a campaign to inform the Italian population about the importance of preventing and treating periodontal diseases. SIdP president Mario Aimetti was interviewed by the Associated National Press Agency (ANSA).

Poland: The Polish Society of Periodontology promoted the Oral Health & Pregnancy project, the educational campaign launched last year by the EFP in partnership with Oral-B.

Portugal: The Portuguese Society of Periodontology and Implants handed out leaflets about periodontal health in Lisbon, Porto, and Coimbra. Susana Noronha, the society’s president, was interviewed for the Canal S+ health-focused television channel.

Romania: The Romanian Society of Periodontology organised demonstrations for general dentists and periodontists in Bucharest and other cities, and courses about the side-effects of medication used in periodontology and the role of periodontal therapy in the day-to-day practice of the dental clinic.

Spain: The Spanish Society of Periodontology and Osseointegration launched the report Tobacco cessation and oral health, which offers guidance on how tobacco use can be tackled within the dental practice and protocols to help patients who want to give up smoking.

UK: The British Society of Periodontology launched the “A lifetime of smiling” campaign, which emphasises the message that it is never too early to develop good oral-health habits. It produced a range of educational materials for children, parents and carers, dental professionals, and healthcare professionals.

The Federal University of Paraná in the south of the country held events to raise public awareness of the impact of oral health on general health, involving five faculty members and 30 students and reaching more than 700 people in hospitals, the university campus, and public parks.

At the Metropolitan University of Santos, more than 40 students took part in an action to inform the public of the risk of biofilm accumulation and the effect of periodontal diseases on overall health. Event co-ordinator Professor José Sani Neto said: “We look forward to participating in next year’s action as this EFP initiative has become an international move towards public education on the consequences of periodontal diseases.”

In Georgia, the Albus International PerioSchool Club produced a video about European Gum Health Day 2018, which it posted on its Facebook page and which it plans to distribute on Pulsi TV, the country’s only medical television channel.

“Within the EFP, never has European Gum Health Day 2018 received such an overwhelming and massive support as this year, with 29 out of 30 affiliated societies having jumped onboard,” said Dr Struillou.

“The rich array of events, publications, and media initiatives developed by these 29 European societies reveal the dynamism and pluralism that are the core strengths of the EFP, which explain why the EFP is the global benchmark in periodontology and implant dentistry.”