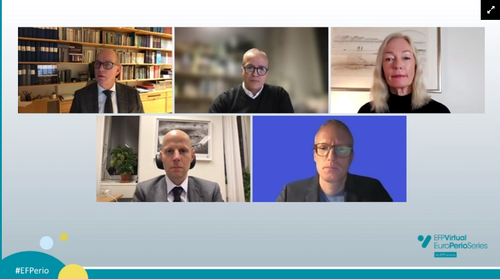 The EuroPerio Series of online education events focused on material related to the forthcoming EuroPerio10 congress (Copenhagen, June 15-18), has been given a very positive rating by people who participated in the seven sessions.

The idea of the EuroPerio Series was to prepare the way for the congress, which was originally scheduled for June 2021 but postponed by a year because of the Covid-19 pandemic. After a “kick-off” session last June on mucogingival surgery around teeth and implants, seven sessions were held between September 13 and March 14.

Participants in the sessions were invited to complete a survey. Respondents gave an average rating of 4.52 for the overall quality of the EuroPerio Series, based on a five-point scale ranging from 1 (very poor) to 5 (excellent).

The quality of the educational information provided was given an average rating of 4.51 with the highest score (4.66) going to the sixth session (February 14) on personalised medicine in periodontal and peri-implant diseases, featuring contributions from Bruno Loos (Netherlands), Mariano Sanz (Spain), Egija Zaura (Netherlands), and Niki Moutsopoulos (USA).

In terms of the relevance of the information to the participants’ own work, the average rating was 4.39, with the highest value (4.52) going to the kick-off event and the fifth session (January 10), devoted to innovations in the surgical management of peri-implantitis, with contributions from Tord Berglundh (Sweden), Andreas Stavropoulos (Sweden), Lisa Heitz-Mayfield (Australia), and Jan Derks (Sweden).

The management and organisation of the meeting was given an average score of 4.61, with the highest value (4.75) given to the sixth session.

Comments received in the survey included “excellent speakers with clinically valuable information presented”, “very interesting and perfect management”, and “thank you very much for all the great webinars.”

The EuroPerio Series was part of EFP Virtual, the federation’s initiative to use online education provide high-value scientific knowledge about periodontology and implant dentistry to the dental community around the world.

“We are delighted that the EuroPerio Series initiative was so well-received and highly rated by our peers, as it proved to be a worthy teaser for what is to come in June,” said Phoebus Madianos, chair of the EuroPerio10 organising committee. “The very essence of EuroPerio was reflected in these online events, and all credit goes to our faculty and speakers who guarantee that the state of the art in periodontology and implant dentistry will be presented in Copenhagen.”