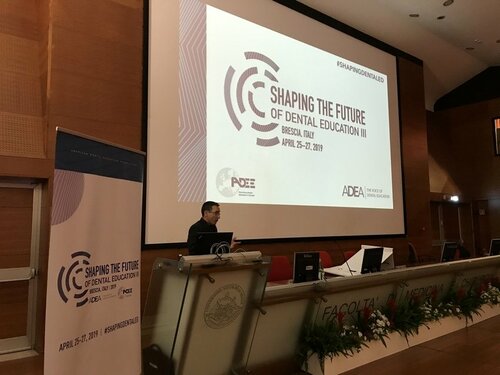 Lior Shapira, elected member of the EFP executive committee and co-ordinator of Gum Health Day 2019, gave a presentation about the federation at a key international conference devoted to the future of dental education.

Prof Shapira told the conference – held in Brescia, Italy, from April 22 to 27 – how the EFP operates and how it creates effective networks with its various “stakeholders”. These include the 37 EFP-affiliated national societies of periodontology, individual periodontists and dental professionals, other healthcare workers, dental students and researchers, regulatory authorities, the industry,  the media, and the public.

He explained that different channels were needed to reach such a variety of stakeholders because of their different needs.

In education, he explained the four stages of the accreditation process for the EFP-accredited postgraduate programme of periodontology, taught at 16 universities, explaining how this programme “provides harmonisation of periodontal training.”

Prof Shapira, who is professor and chair of the department of periodontology at the Hebrew University–Hadassah Faculty of Dental Medicine in Jerusalem (Israel), talked about networking between the post-graduate programmes, including the biennial symposium where students and teachers come together for four days to present cases and scientific projects.

Since its foundation in mid-2017, an increasingly important networking role has been played by EFP Alumni, graduates of the programmes and members of faculty, who are among the world’s most influential periodontists.

Turning to media, Shapira (who will become EFP president in 2021) highlighted the role of the EFP’s European Observatory of Periodontology and Implant Dentistry, set up to be “a repository for evidence-based information and the authoritative body for comment and statements on issues relating to periodontal diseases and relevant issues around implant dentistry.”

More broadly, he discussed the EFP’s approach to the media, through press releases, press conferences at major events such as EuroPerio9, where “a good selection of newsworthy abstracts from the scientific programme was the foundation for EuroPerio9 press activities.”

Within the dental community, the key vehicles for networking are events such as EuroPerio and Perio Master Clinic, and publications such as the Journal of Clinical Periodontology, JCP Digest and Perio Insight, he explained.

Prof Shapira also highlighted the importance of the recently launched toolkit on the new classification of periodontal and peri-implant diseases and conditions, based on the conclusions of the 2017 World Workshop held by the EFP and the American Academy of Periodontology.

He also focused on the workshops organised by the EFP, both the annual Perio Workshop (European Workshop in Periodontology) – which tackles a specific subject through systematic reviews and consensus papers – and “mini workshops” with other health organisations.

These smaller workshops have produced material later disseminated via projects with partners, such as Oral Health & Pregnancy (with Oral-B), Perio & Caries (Colgate), and Perio & Diabetes (Sunstar).

Prof Shapira devoted a significant part of his presentation at the “Shaping the Future” conference to Gum Health Day 2019, which he is co-ordinating for the EFP. He explained the aim of the May 12 awareness day devoted to periodontal health and how the federation works with the national societies to create an efficient network that delivers a range of activities to increase public awareness.

Other topics covered by Prof Shapira’s presentation included the role of the EFP App and the EFP’s use of social media.

“Most of the audience was not aware to the wide range of global networking activities of the EFP” he said. “Many key leaders in dental education raised the possibility of more collaboration between the EFP and dental-education organisations.  All the suggestions were very relevant and we will consider each one in the near future.”